from above you it devours

How's this whole mixtape thing working out for you? What are your listening patterns? Do you think of them as compilation albums, or a radio show? And why do they provoke so little actual discussion of music?

14 years ago
There should be Groundhog Day gifts.

It should be the same gift every year.
12 Comments
Tags: firstperson, movies

words mean things. so do logos.

14 years ago
I've been seeing a lot of people walking around with t-shirts with this logo on them:

. You probably think that logo means "POWER!!" You are wrong. Your shirt doesn't say "POWER!!", it says "I'm a dumbass", because that logo actually means "Standby". Its use is governed by the "Energy Star" standard. The logo for "power" is

This public service message has been brought to you by the words benefit, fundraiser, decimate, penultimate, and inappropriate.

14 years ago
Why has nobody yet hacked one of those "I lost me to meth" billboards into "I lost mini-me to mini-meth"?
13 Comments
Tags: pranks

It's Not a Compound

14 years ago
Scene missing! A video in this post has disappeared. If you know of an accessible version of this video, please mail me so that I can update this post.
20 Comments
Tags: mpegs, music, scene missing
Current Music: as noted

DNA Lounge: Wherein we drink Pruno and I use the word "shitcockery" several times. 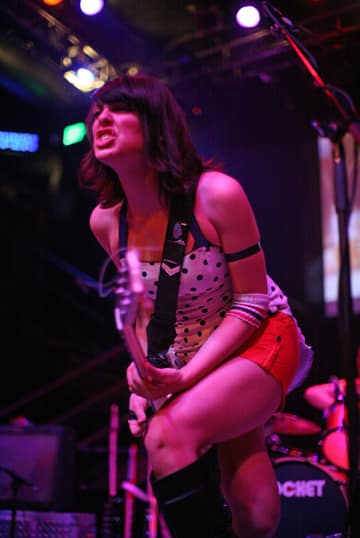 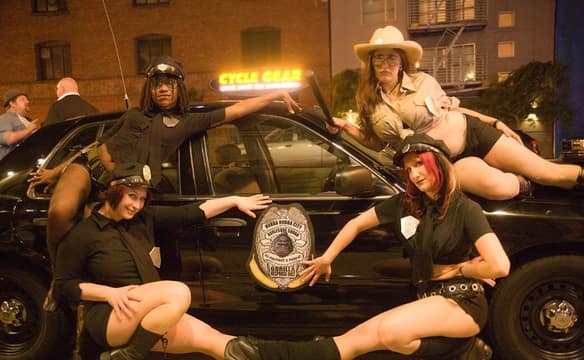 Photos of Rocket at Pop Roxx, and of Hubba Hubba Revue: Prison Edition are up now. Rocket were awesome, go buy their CD.

Hubba Hubba was also, but I will tell you about one awesome aspect in particular, and that is Pruno. If you have not read Eric Gillin's fine essay on Pruno, go read that now. I'll wait. ("Remember to feel the hate!")

Yeah, so. Jared wanted to do something prisony in the way of drink specials, so he was serving normal cocktails Pruno-style: in a zip-loc baggie, with a straw. In the hands of Inmate Kingfish in this photo is, if I'm not mistaken, a Mojito. A "prunojito" if you will.

So remember those new bathroom signs I had made? Someone stole one already. They tore it right off the men's room door near the end of the last New Wave City.

Fortunately I had a spare (the original prototype) of that particular sign. But come on, what the fuck!

I just can't have nice things. 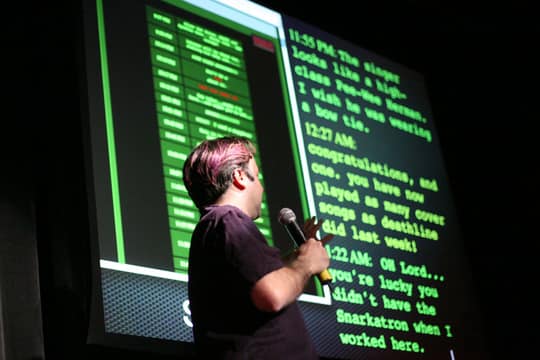 Photos are also up of Ignite SF. One of the talks was by John Adams on the topic of our erstwhile Snark-o-tron, the sign hanging below the DJ booth.

As you may have noticed, we turned off publing posting to it a few months ago, mostly due to rampant shitcockery. (There were too many people who don't know the difference between "funny" and "mean". Plus, we were tired having to explain to a band's manager why the audience just insulted the band in glowing lights, or having to explain to people who run competing events why spamming our sign with their own advertisements twice a minute was not cool.)

So John's talk was partly about the technical aspects of getting the thing working, but mostly about the aforementioned shitcockery.

He's giving the talk again at the Web 2.0 conference at Moscone on Friday at 10AM, for those of you who are into that sort of thing.