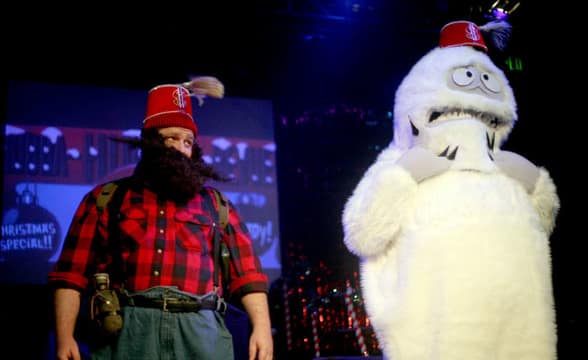 R. Black has a book coming out: Futura: The Art of R. Black. It looks great (look inside). Rich has been doing flyers for most of the DNA Lounge live shows for several years, so I'm sure you're familiar with his work... But back to Christmas --

The DNA Lounge staff received an unexpected present from some guy in West Virginia: he mailed us a Chick Tract. The comic in question is "Set Free" which seems to be mostly about how Going to Hell Would Be Unpleasant. This seems pretty poorly chosen, frankly. If you're going to send us a Chick Tract, wouldn't it have been more appropriate to pick one about the evils of alcohol, homos, and/or loose women?

I honestly have no idea if this was a joke, or an attempt to save us. I guess the effort is appreciated, either way.

On the off chance that you don't know who Jack Chick is, he's a hate-spewing fundamentalist Christian cartoonist: sort of the Fred Phelps of the comic-strip world.

If you ever have the chance to watch Chick's movie, The Light of the World, I recommend it. I'm sure you don't want to give this guy any money, so please BitTorrent it. I also recommend watching it while in the company alcohol, homos, and/or loose women.

I suspect you haven't heard at least 80% of these. And I hope that you will now be glad that you have. Or that they will make your headmeats convulse. Either way.