The evidence belies the long and firmly held belief that humans are the animal world's biggest wimps and, if not for our big brains and advanced weapons, we'd be forced to subsist on fruits and vegetables, always in danger of being gobbled up by fiercer predators.

The problem with that theory, Lieberman said, is that we began adding meat to our diets around 2.6 million years ago, long before we developed advanced weapons like the bow and arrow, which was developed as recently as 50,000 years ago.

While some of our ancestors' meat-eating may have been due to scavenging, Lieberman said the appearance about 2 million years ago of physical adaptations that have no impact on walking but that make humans better endurance runners provide evidence that early scavengers became running hunters.

Specifically, we developed long, springy tendons in our legs and feet that function like large elastics, storing energy and releasing it with each running stride, reducing the amount of energy it takes to take another step. There are also several adaptations to help keep our bodies stable as we run, such as the way we counterbalance each step with an arm swing, our large butt muscles that hold our upper bodies upright, and an elastic ligament in our neck to help keep our head steady.

Humans, he said, have several adaptations that help us dump the enormous amounts of heat generated by running. These adaptations include our hairlessness, our ability to sweat, and the fact that we breathe through our mouths when we run, which not only allows us to take bigger breaths, but also helps dump heat.

"We can run in conditions that no other animal can run in," Lieberman said.

While animals get rid of excess heat by panting, they can't pant when they gallop, Lieberman said. That means that to run a prey animal into the ground, ancient humans didn't have to run further than the animal could trot and didn't have to run faster than the animal could gallop. All they had to do is to run faster, for longer periods of time, than the slowest speed at which the animal started to gallop. Most animals would develop hyperthermia -- heat stroke in humans -- after about 10 to 15 kilometers, he said.

The fax machine we have in the office is a piece of shit. Not only is it slow, but I noticed the other day that the cartridge doesn't contain toner, it contains, basically, carbon paper on which everything that the thing has ever printed is easily readable. Wow, that's secure.

There seem to be a zillion services out there that let you send and receive faxes via an email gateway. So many that they clog the googles. Are any of them any good? Do you use one?

I'm hoping for something like: sign up with a service that gives us a new telephone number such that when someone faxes something there, it shows up in my inbox as a PDF or JPEG or something. And likewise, a web page or email address that lets me attach an image that will be delivered to someone else's telephone number.

(Suggestions that involve buying modems and running software locally will be summarily ignored.)

Update: Hey, what do you know: Macs have this shit built in, and it actually just works, out of the box! You just plug the internal modem into a phone line and it'll dump incoming faxes in a folder, print them, and/or email them. And sending faxes is on the Print menu. It's almost like the future.

14 years ago
This is my new favorite building. It's some kind of crazy Akira technology that dropped from orbit last year. It's going to start sprouting tentacles any day now, I'm sure. 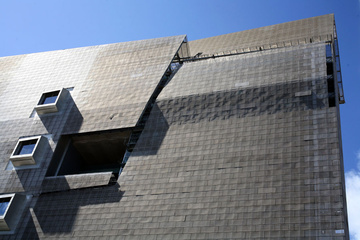 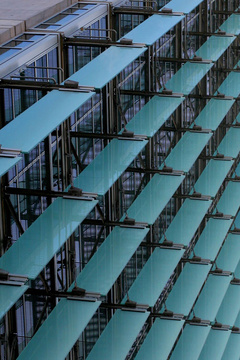 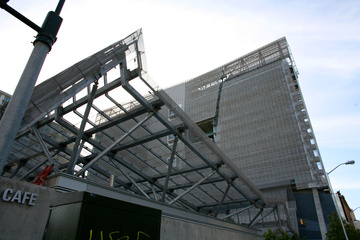 Apparently the mesh panels on the south side are part of a convection system that makes the building use half the power of other buildings its size. This is interesting, too: "The tower also nudges workers to exercise. Most elevators stop only at every third level, forcing employees to use stairs for part of the journey. To make the climb enticing, wide staircases march past collegial atriums and stop at protruding picture windows."

I think it's even cooler looking than the de Young Museum, which is itself a pretty awesome building. That's just weird, that a government office building would even come close.