15 years ago
Wow, cleaning a digital SLR's sensor is a pain in the ass! My pictures had been getting spottier and spottier, but the last straw was actually a hair: somehow a hair got under the shutter and onto the sensor. First I thought it was an eyelash, but when I finally got it out, it was almost an inch long!

So I bought one of these kits, and it's really hard to use. Basically you're trying to squeegie a piece of glass to get the little particles off of it that are literally microscopic. So it goes: take the lens off; squeegie out the camera guts; put the lens back on; take a picture; download that to the computer; note that you've made the specs worse; repeat until you reach something that seems like a local maximum. BLEH! Maybe it'd be easier if I had a really huge magnifying glass.

Getting someone else to do it is a hassle too, as the local shops seem to just send it off to the manufacturer for cleaning, with a 2-3 week turnaround time.

(Did you know that the HTML entity for → is &rarr;? Who knew that arrows were so piratey.)

The wonders of BitTorrent

15 years ago
This is so not what living in the future was supposed to be like. Not even twenty minutes into the future.

Every time I've ever tried to use BitTorrent for anything, this is how it goes. Based on past experience, I expect that each of these will get to 98.2% and stop there forever.

15 years ago
So, on the way home the other night, baconmonkey got some good footage of the freeway melting on his fancy new HD video camera. His friends were all, "OMG sell it to the networks". He explains why that trick doesn't actually work: Adventures in Citizen Journalism.
3 Comments
Tags: mpegs, tv
Current Music: The March Violets -- Long Pig ♬

DNA Lounge: Wherein topics include the under-21 permits, band photos, youtube, and the death of internet radio.

15 years ago
First things first: I'm sure you're all wondering what's going on with the under-21 thing. I'm sure of this because I've gotten a bunch of emails from people wanting to know what they can do to help, or who to write letters to... Well, we're still figuring that out. We've been getting advice from some people who know their way around situations like this, and we're working on our strategy. Our advisers are advocating a quieter, more political approach than what we did last time around. This goes against my instincts, of course, since I'm more of a frontal-assault, "let justice be done though the heavens fall" kind of guy. But we're going to give that a shot first. If and when the time comes for public outcry and letter-writing, you will certainly read it here first... Thanks for the support! 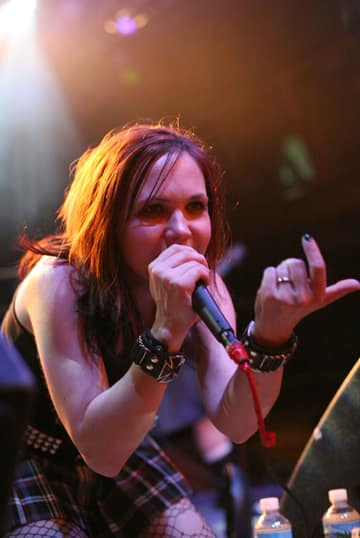 Photos are up of a few recent shows: Betty X, The Lovemakers, and The Nice Device. You probably didn't know The Lovemakers were playing here, because that was at a private party for CNet. And apparently there was a gargoyle that night: this guy with a camera on his head who webcasts his life was there. (Too bad his video clips don't play for me...)

Speaking of, there's now a DNA Lounge YouTube user and group, which is our attempt to catalog the videos that customers have posted of our past events. If you've shot video here, add it to the group!

I've also gone back and embedded some videos into some of the older photo galleries. There were more than a hundred of them, so I'm not going to list them all here; it'll be easier for you to find them by just clicking on the DNA user anyway.

And... webcasting still under assault, yadda yadda. There has been a new bill introduced in Congress that would make the license fees charged to Internet radio stations be similar to the fees charged to, e.g., satellite radio stations, instead of much, much higher: if this bill passes, the fees will be a percentage of revenues instead of a fee per song per user. Rusty from SomaFM has a good, brief explanation of the situation. Support H.R. 2060, the Internet Radio Equality Act.

15 years ago
Dali Clock 2.24 out now for MacOS 10.4, PalmOS, and X11. This release includes a MacOS screen saver version of the clock, and there are a few minor display-glitch fixes to the PalmOS version. Also the PalmOS version has a color application icon now, ooooooh.

So, apparently there's no way for a running application to turn its dock icon off. But, you can configure the app to be one that doesn't have a dock icon when it is launched, and then after that, you can turn the dock icon back on. So the way you do this is, you put LSBackgroundOnly=1 in the Info.plist (LSUIElement=1 does not work) and then if you want to have a dock icon after all, you call TransformProcessType (&psn, kProcessTransformToForegroundApplication);. So far so good. Except, LSBackgroundOnly applications never get a menubar: when you select the window, the menubar stays the menubar of the previous application. So when the dock icon is hidden, there's no way to bring up the Preferences dialog so that you can say "actually I do want a dock icon after all." Keyboard shortcuts don't work either. So that's kinda lame.

Also, the way preferences and bindings work is still complete insanity. How can such a basic, fundamental part of the OS be so completely, incomprehensibly insane? And then screen savers take the baseline insanity of it and layer even more crazy on top, because of the moronic way that previewed screen savers run in the same process as the System Preferences application. Madness, I tell you.

Night Flight was awesome.
Here's someone selling a 24-DVD set for $120.

15 years ago
"Here we have a hyperbolic display of blogs using both the WWE and the ICWSM 2007 data sets.