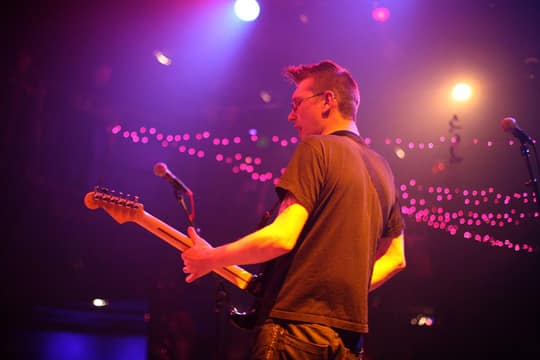 Photos are up of The Prids at Pop Roxx, and of the last Meat. The Prids were awesome (like I told you they would be) and it was a really good turnout!

In plumbing news, this has been a banner weekend, in that it is the first time in, I think, three years that all the faucets in all the bathrooms are working at the same time. Go us.

The sinks in the women's room have handles now. This seems like an admission of defeat because, well, it is. Those motion sensors seemed like such a cool space-age idea. And they seemed like they'd be reliable since they have no exposed moving parts, and they are used in every airport in the world. But they just suck. Look for the rest to vanish in favor of the lowtech as they fail in the future.

16 years ago
Here's some ancient history: David Paul sent me links to video from a couple of events he produced at DNA Lounge in the early 90s: House of Pain, "Jump Around", Jun 1992, and Invisbl Skratch Picklz, Feb 1994.

(Cypress Hill's official video for Insane in the Brain was also filmed at DNA Lounge, in 1993. Check out the Keith Haring mural on the walls and ceiling of the upstairs lounge in the background of the head-shots in that video. The previous owners just painted over that. We uncovered bits and pieces of it during construction, but never enough to save.)

I hadn't looked before, but there are (unsurprisingly) a bunch of random camphone DNA videos to be found on Youtube by searching for either "dna lounge" or "dnalounge".

the ImageCapture SDK baffles me

16 years ago
Dear Lazyweb, I'm lost in a maze of twisty APIs, all alike.

So, this thread seems to be talking about exactly the kind of thing I'm trying to accomplish: find a connected camera; ask it what capabilities it has; and then send (undocumented) PTP commands to it to do other things, like grab the current viewfinder image.

But, the code posted in that thread references symbols that I can't find any documentation for or definitions of, like kICAMessageCameraPassThrough (which seems to be the ICAObjectSendMessage() argument that lets you compose raw PTP commands). That sounds like something that should be in ICACamera.h or one of the other ICA headers in ImageCapture.framework, but it's not.

Then I found Image Capture SDK for Mac OS X v10.4 (from here) which contains those symbols. So, this sounds like, I have to install this API in order to do these things. A little odd that it's not installed by default, but whatever.

But... WTF is this thing? This DMG doesn't include an installer. It includes an XCode project that builds an application, not a framework (and that application appears to do nothing).

This must be some new usage of the word "SDK" with which I was previously unfamiliar.

Update: Current best guess is that there is no installer because the ImageCapture API is pre-installed on 10.x as a part of Carbon... but, what's in this DMG documents some hypothetical future version of this SDK, so a bunch of interesting symbols that really oughta someday be a part of it are just dumped willy-nilly into the sample application?

And to add insult to injury, the definitions of the structures in the header files use C++ syntax that doesn't work from Objective C code. Nice. (Update: apparently .mm means "ObjC++" which is a bastard hybrid that mostly works.)

Can any of you make any sense out of this? Or do you know someone at Apple who might be able to? Since that mailing list archive helpfully obfuscates email addresses (fuck you, you fucking fucks) I can't even mail any of the people involved in that thread to ask for clues.

I did get a copy of Canon's "official" SDK, but it looks kind of horrible, so I'd rather do things by following the Apple Party Line instead, since that really seems like it would have to be the least painful route. (Likewise for any approach that involves trying to port some janky-assed Linux software to MacOS.)

Maybe I should be doing this with some other API instead, but I can't tell. The USB stuff in IOkit.framework seems way too low level; like, I saw no way to ask a device, "are you a camera? do you provide pictures?" but only ways to ask them things like, "are you product 0x1ABC from vendor 0xFF0A?"

Something I read somewhere said that Quicktime was the way to go for getting images out of still cameras, but my experience with all the Quicktime-related docs on developer.apple.com is that they are basically, "this is how it used to work in MacOS 8." What's up with that?

I hate you, Milkman Baconmonkey.

DNA Lounge: Wherein I just let the Sudafed do the babbling for me.

16 years ago
Photos are up of last weekend's Bohemian Carnival. Which, as a party, is shaping up... I was pretty concerned about them in the beginning, but they've gotten a lot better about the pacing of the acts and keeping the flow of the event moving, and now they wrap up the more space-consuming acts by around midnight to give people room to dance. They've also been getting a much better turnout. Good for them... (Even though they are dirty, dirty clowns.)

So, I've got a cold, and came home to pass out on the couch instead of staying for tonight's show. I rarely watch our webcasts, since I'm always at the club for the shows I want to see, but tonight I watched Drop Black Sky's performance on the webcast (in a maximized RealVideo window fed to my video projector) and I gotta tell you, we are so not living in the future yet. Pixels the size of my thumb! More MPEG noise than signal! This does not feel like the Twenty First Century. This barely feels like 1998.

"I am Jack's exorbitant bandwidth bill. Without me, he might be in the black."

The sound quality isn't bad, though.

Drop Black Sky are really good, by the way. Go buy their album. They're also tied for third place for number of times a band has played here. The current standings are: Smash-Up Derby at #1 with 15×; and Gooferman at #2 with 6× (but both of them play every month at their respective clubs, so that's kind of cheating!) Tied for #3 at 5× each, are Drop Black Sky, Halou, Nina Hagen, and The Servants.

I also missed the Crüüüüxshadows show last weekend (thus no photos), but I think I know how that story goes. Maybe you should go read my previous Stonehenge-themed entries about them, from back when I posted here more often, and was funnier.

I strongly advise you to come to Pop Roxx this Saturday, as The Prids are playing, and they were my favorite band of 2006. They're also great live. Seriously, be there.

There will be no Stonehengery.

"2000 pigs sacrifice to the deity General Chao of Wudeh temple"

A litle less nitrous next time

The Pig Who Taught His Asshole To Talk

(I have a hard time seeing it this way, but apparently that's not actually an anus with lips. It's the other way around: it's a head with two snouts, and the goatse in the middle is two of the eyes, not a mouth.)

R2D2, Architect of the Rebellion

16 years ago
A New Sith, or Revenge of the Hope

If we accept all the Star Wars films as the same canon, then a lot that happens in the original films has to be reinterpreted in the light of the prequels. As we now know, the rebel Alliance was founded by Yoda, Obi-Wan Kenobi and Bail Organa. What can readily be deduced is that their first recruit, who soon became their top field agent, was R2-D2. [...] Much of Obi-Wan's behaviour in this film, and Yoda's in the next, can best be understood if they are frankly scared to death of what Luke might become.

This is the best Star Wars nerding I've read since The Endor Holocaust...

It is named the Proteus, and is the first of what might be a long line of wave adaptive modular vessels -- WAM-V for short -- developed by Ugo Conti, an engineer and inventor. Conti calls it "the prototype of a new class of vessel."

Using technology developed by Conti's El Cerrito Marine Advanced Research Inc., the WAM-V is "a new class of watercraft ... that delivers a radically new seagoing experience." It has twin hulls, like a catamaran, connected to each other and a control cabin by four metal legs. The legs ride on titanium springs -- like shock absorbers -- that allow the WAM-V to adjust to the surface of the water -- to flex like knees.

The cabin, which sleeps four, can be lowered into the water -- "like a helicopter landing," Conti said -- and sail off on its own.

Jim Jessie, a yachtsman who has been sailing San Francisco Bay for more than 65 years, has never seen anything like it. "It's different," he said as he watched the Proteus slink over the wake of a passing boat, its hulls flexing. "It wiggles like a porpoise or a whale," he said.