So you know you are a nerd when you go to a Halloween party and everyone gathers around a computer to watch a movie about protein synthesis. Ok, it's a really funny movie about protein synthesis, from 1971, full of stoned flower children rolling around in the grass. You must see it. You can pretty much skip right through the first part with the chalkboard explanation [skip to 3:10]. Keep an eye out for the puffs of smoke representing GTP hydrolysis-- my favorite touch. 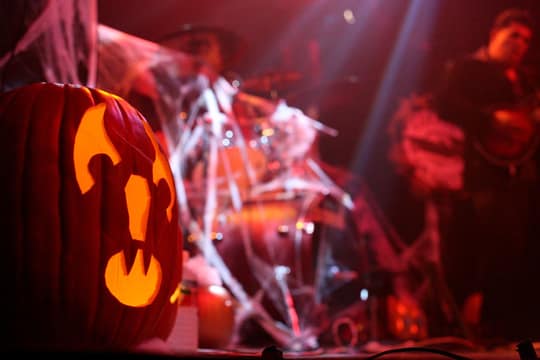 Some photos are up of the Pop Roxx pre-Halloween nuttiness. We will be seeing you on Tuesday, yes?

16 years ago
The long out-of-print Urgh! A Music War will be showing on VH1C on Mon, Oct 30 at 6pm PST (9pm EST). They have it listed as "2 hours", which I hope means it's the 124-minute edit, not the 96-minute edit that ran on Sundance a few years ago. It would behoove you to record this, as it's probably the second-best concert film ever made. *

Also, here's a decent documentary about Blade Runner (52 minutes). There's not a lot new in there if you've read Future Noir: The Making of Blade Runner (which you should) but at 40:00, there's a deleted scene that I hadn't seen before of Deckard visiting Holden in the hospital.

Update: The VH1 showing was the same as the Sundance showing, except they omitted three more acts: Surf Punks, My Beach My Wave; The Cramps, Tear It Up; and Invisible Sex, Valium. Leaving out that Cramps performance was nuts -- it's one of the high points of the movie! Both showings omitted three other performances, which I haven't seen since the 80s: Gary Numan Down in the Park (he drove around the stage in a little bumper car!); Skafish, Sign of the Cross; and Splodgenessabounds, Two Little Boys.

Forzie, the Te Uku-bred Barnevelder chick - hatched at Marlene Dickey's property at the start of last month - has died.

But it wasn't the extra legs that led to its death, more likely an extra anus, Mrs Dickey believes.

"He developed two bottoms and I think he got glugged up," she said.

Tina was fitted with a plastic wheel four years ago to replace her rear right leg. But increasingly warmer autumns mean Tina hibernates later in the year, leaving her battling to cope with muddy grass and slopes and dead leaves. So the rudimentary wheel has now been replaced with an air-filled tyre and a spring suspension system with shock absorber.

The spur thigh tortoise was donated to Longleat in 2002 when she seemed to be depressed because of her lack of manoeuvrability. She rapidly recovered when the plastic wheel was fitted but it wore out and buckled over time as she tried to access rougher parts of her enclosure.

Darren Beasley, the animal's carer at Longleat, said: 'The new system is incredible and allows Tina to go all over the place. She is one of the oldest tortoises we have here at Longleat but you would never know it. She is now among the fastest and certainly making the most of the warm weather prior to hibernating. And she can cope with any terrain -- it's amazing.'

I love this photo.
Elephants are mad as hell, and are not going to take it any more.

New developments with rogue elephants -- they rape and kill rhinoceroses; attack villages with intelligent measures like blocking escape routes and pinning down humans before goring them to death; and display psychological traits previously only observed in people.

Researchers are thinking of this as a sort of emergent species-wide emotional breakdown resulting from human interference over long periods of time and the consequent destruction of important social bonds for the elephants.

16 years ago
This is genius.

Lyle Hopwood uncovers a lost Ballard work, apparently the only surviving fragment from JGB's novelization of David Cronenberg's film of Alien, before the studio infamously got cold feet and replaced Cronenberg with Ridley Scott and Ballard with Alan Dean Foster.

16 years ago
Fire breaks out at Salt Lake crematorium

Fire officials said the six-hundred pound man was in being cremated when his body fluids were too much for the oven. The body fluids seeped out onto the floor and ignited causing a fire at the Garner Funeral Home in Salt Lake City. "Those fluids can be very flammable," said Scott Freitag of the Salt Lake City fire department. "Sort of like a grease fire."

The crematorium is back in business and the funeral director said they'll notify the family to assure them their loved one wasn't harmed.

Between 2003 and 2005, Greenland's low coastal areas shed 155 gigatons (41 cubic miles) of ice per year, while snow accumulation in the interior of the ice sheet was only 54 gigatons per year. The amount of ice lost in two years is roughly the same as the amount of water that flows through the Colorado River in 12 years.

The GRACE satellites sense changes in mass beneath them by responding to changes in gravitational force. As the twin satellites orbit the Earth in tandem, the distance between them changes as a result of changes in the concentration of mass on the Earth below.

(Now that part's kinda awesome: they used the satellites responsible for this gravity model, the data of which is normally intended for, basically, making sure your ICBMs land where you meant them to.)

Overall, Greenland lost 20 percent more mass than it received in snowfall each year. These results are consistent with overall trends in ice loss that other types of observations of Greenland have documented, including radar-based estimates of accelerating glacier flow off the ice sheet.

According to one of the study's authors, Jay Zwally of NASA's Goddard Space Flight Center, "This is a very large change in a very short time. In the 1990s, the ice sheet was growing inland and shrinking significantly at the edges, which is what climate models predicted as a result of global warming. Now the processes of mass loss are clearly beginning to dominate the inland growth, and we are only in the early stages of the climate warming predicted for this century."

16 years ago
Shuttle Launch as seen from ISS somewhere high:

It looks like it's not very high up, doesn't it? That's because it's not.

We've been only to low Earth orbit since 1972, and from that altitude of 220 miles, looking at the Earth is like peering at a basketball with your cheek pressed against it. We've spent 32 years "exploring space" in low Earth orbit. Exploring nothing.

Update: Probably not actually from ISS, possibly from a high flying plane, but nobody has yet pointed to the actual source of these photos.

We're still peering at the basketball, though.