14 years ago
You will all now go and read kfringe's story about his grandfather's tomato press.

One of the most aggravating moments of my life came when I asked my grandfather for the recipe for his tomato sauce. I can't remember most of the answer, but it started with "first you buy some seeds." The answer then meandered through a half hour's worth of required soil conditions, planting dates, picking dates, what kind of rain you needed, the proper twist of the wrist used when picking the perfect tomatoes... It took him a whole afternoon to finish talking.

14 years ago
So, apparently there are some new Battlestar Galactica shorts on scifi.com, but I can't get them to play. Dear Lazyweb, please convert them to Quicktime files and send them to me so that I don't have to fuck around with their stupid little Flash player.
34 Comments
Tags: firstperson, lazyweb, tv
Current Music: Sharkbait -- Feel Steel ♬ 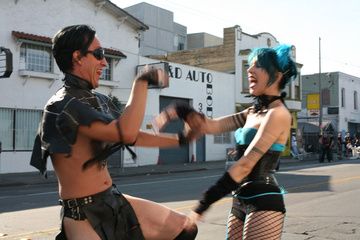 and people say I'm hard to shop for, cont'd.

14 years ago
I think we all know how this movie ends:

Scientists working at a British laboratory have achieved one of the most controversial breakthroughs ever made in the field of stem cell science by taking cells from dead embryos and turning them into living tissue.

that's nobody's business but the turks

14 years ago
Neat flash animation of who has controlled the middle east throughout history.
Scene missing! A video that used to be embedded in this post has disappeared. If you know of a copy of this video that is still accessible, please mail me so that I can update the link.
15 Comments
Tags: doomed, maps, mpegs, scene missing
Current Music: Sharkbait -- Vertical Assault ♬

Harnessed to the walls, their surgical tools moored down with magnets, a team of French doctors are to attempt the world's first human operation in zero-gravity on Wednesday. It will serve as a test for performing surgery in space.

Working inside a custom-made operating block, three surgeons, backed by two anaesthetists and a team of army parachutists, will remove a fatty tumour from the forearm of an intrepid volunteer over the course of a three-hour flight.

Miniature surgical tools, held in place with magnets placed around the patient's stretcher, will be used to adapt to the reduced size of the operating theatre, which was designed by a French elevator manufacturer.

The European space plane, a specially-adapted Airbus A300 operated out of Bordeaux, flies in a series of roller-coaster like parabolas, creating between 20 and 22 seconds of weightlessness at the top of the curve, a process repeated around 30 times for a 3-hour flight.

As well as the challenge of working in zero gravity, the surgical team will have to halt their work each time the plane pulls out and gravity resumes.

The law of the dead complete with squeaky toy! This faithful plush adaptation of the Necronomicon is modified for a slightly younger audience. It features a squeaker and a gloved hand for rolling human bones! This extreme high quality, collectible plush "book," has detailed and interactive features on 6 different pages, 4 inside plus the front and back covers. It measures 15-inches tall x 12 1/2-inches wide x 3 1/2-inches deep. Limited edition of 1,200 pieces.

14 years ago
Remember what it was like when being a president meant you were expected to be able to string more than four words together into a coherent thought without a teleprompter?

"This is the first 20 minutes of Bill Clinton's interview with Chris Wallace on Fox News Sunday. In this clip, Wallace asks Clinton why he didn't do more to capture or kill Osama bin Laden while he was in office. Clinton clearly feels like he has been set up and doesn't hold back in telling Wallace just how he feels."

God told me to hate you

14 years ago
Letter to a Christian Nation

After The End of Faith came out, I received thousands of emails, many from devout Christians who did their best to show me the error of my ways. I answered these emails individually at first, but they then came in such torrents, and were so similar in content, that I developed a boiler-plate "Letter to a Christian" in response. Occasionally, someone would respond to my form letter with further arguments in defense of God. So the letter began to evolve, and then I realized that I could write a short book and address all the committed Christians at once. [...]

There is no way around the fact that I'm advocating a certain kind of intolerance, but it is not political intolerance. I'm not saying that people should be jailed for their religious beliefs. I am saying, however, that certain beliefs are so lacking in merit that there should be no question of our "respecting" them. People who claim to be certain about things they cannot be certain about should meet resistance in our discourse. This happens quite naturally on every subject but religion. For instance, a person who believes that Elvis is still alive is very unlikely to get promoted to a position of great power and responsibility in our society. Neither will a person who believes that the holocaust was a hoax. But people who believe equally irrational things about God and the bible are now running our country. This is genuinely terrifying. We must find a way of criticizing and marginalizing bad ideas, even when they come under the cloak of religion.

Then he turns the snark up to 11 with those pesky "facts":

Only 28% of Americans believe in evolution (and two-thirds of these believe evolution was "guided by God"). 53% are actually creationists.

"Despite a full century of scientific insights attesting to the antiquity of the earth, more than half of our neighbors believe that the entire cosmos was created six thousand years ago. This is, incidentally, about a thousand years after the Sumerians invented glue."

87% of Americans say they "never doubt the existence of God."

28% of Americans believe that every word of the Bible is literally true. 49% believe that it is the "inspired word" of God.

"We read the Golden Rule and judge it to be a brilliant distillation of many of our ethical impulses. And then we come across another of God's teachings on morality: if a man discovers on his wedding night that his bride is not a virgin, he must stone her to death on her father's doorstep (Deuteronomy 22:13-21)."

80% of Americans expect to be called before God on Judgment Day to answer for their sins. 90% believe in heaven. 77% rate their chances of going to heaven as "excellent" or "good."

"In the year 2006, a person can have sufficient intellectual and material resources to build a nuclear bomb and still believe that he will get seventy-two virgins in Paradise. Western secularists, liberals, and moderates have been very slow to understand this. The cause of their confusion is simple: they don't know what is like to really believe in God."

65% of Americans believe in the literal existence of Satan. 73% believe in Hell.

"It is terrible that we all die and lose everything we love; it is doubly terrible that so many human beings suffer needlessly while alive. That so much of this suffering can be directly attributed to religion -- to religious hatreds, religious wars, religious delusions and religious diversions of scarce resources -- is what makes atheism a moral and intellectual necessity."

"The president of the United States has claimed, on more than one occasion, to be in dialogue with God. If he said that he was talking to God through his hairdryer, this would precipitate a national emergency. I fail to see how the addition of a hairdryer makes the claim more ridiculous or offensive."