16 years ago
Radio FRNK has finally gone live: a streaming radio station of recent LiveJournal voice posts. This is great. But what it really needs is filters: pitch shifting, slow motion, a vocoder...

won't someone please think of the telemarketers?

16 years ago
This is way more entertaining than the Telemarketer counter-script...

A little while ago I put together a little application on our phone system so that when a telemarketer calls in, I can transfer them to this extension and annoy the hell out of them. I thought about it a bit more and decided to make it a little more interesting, so I can get them to hold on the line as long as possible. Today I recorded a bunch of different voices sounding really interested in what a telemarketer would be offering. Have a listen:

Once I gather enough calls, i'm gong to setup a little podcast of all the best calls from a fortnightly period. Enjoy!

Update: The author now admits that the MP3 is a fake, not a real telemarketer. OMG LAME!

oh, video, why do you vex me so

16 years ago
Dear Lazyweb, what good are you? Seriously.

Someone please tell me how to convert this file into any other video format, using a Mac. Quicktime grays out "Export", and no matter what I've tried with ffmpegX 0.0.9w-r5, it croaks when trying to convert the audio ("qdm2").

You're really disappointing me here, Lazyweb. I'm totally losing faith in you.

"I think it was an expression of his great desire to win."

16 years ago
I will shamelessly steal the perfect subject from kfringe and say "Lock Mr. Bond in the aviary."

A rare exotic bird has been given a new lease of life after his beak broke off -- and a metal one was fitted in its place.

Southern ground hornbills are from southern Africa and can live for up to 40 years. In the wild they eat lizards, frogs and birds' eggs but in captivity survive on rats, mice, and crunchy human skulls. 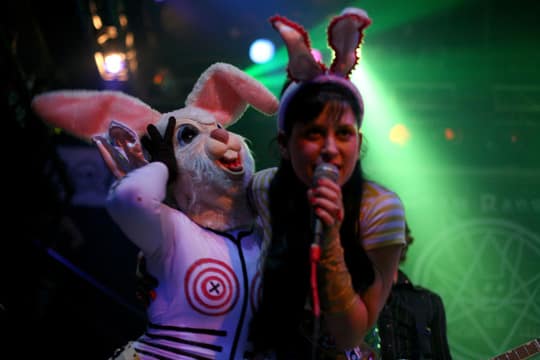 I've been messing with the photos on the front page of the site: they now have text captions built into them, and the top left one will always be a picture from an older gallery of the next upcoming event, if we have any. I'm still not totally happy with how those overlays look, but I guess it's ok.

Oh, photos, we've got photos. Just in, Gram Rabbit at Pop Roxx. I love that band -- you should go buy both of their albums immediately. They put on a fantastic show, and not just because of the gogo dancers in full-on furvert suits.

Also up, Ayria + Life Cried + The Panic Lift. Ayria's not bad. They've played here a few times before, and, eh, I've seen it. The first two bands were that same old cookie monster crap again. Scream into your one vocal effect, bent over at the waist like you're really, really constipated. Repeat

until done. Don't bother to turn off your one vocal effect when doing between-song banter: "Thang-a-lang-a-lang-a-lank yooga-looga-loo!" At least they didn't dress like Cobra Commander this time.

(Would it have been better if they had been dressed as bunnies instead? Well, obviously, but that still would have been insufficient.)

So, yeah, still no kitchen. This may sound familiar to those of you who were following along when we went through the permit dance four years ago. Whenever you build anything, you need a bunch of inspections, and the last one is Building, who is (also) a meta-inspection, who looks at the signatures on your job card that say that the earlier inspections were passed.

And this is how we've been perpetually two months from completion for almost a year.

You can't even pipeline these visits and schedule the inspector for the day after the work is done, because half the time contractors just fail to show up, meaning now you're late and have pissed off the inspector.

Its kind of insane how much this room has cost already, given that it's basically just a hallway with three sinks and a table.

Part of the screwage here is that, for commercial space, you're required to use licensed contractors. In your home, you can just get some Time-Life books and go crazy, and as long as you do the work right, you'll pass the inspections. But you aren't allowed to DIY in a business. It's a conspiracy of some sort, specifically designed to make my life suck.

And even if you were feeling like a scofflaw, it's not like a kitchen could just "appear" one day without that being noticed...

Anyway, assuming our kitchen ever opens, what do you think we should serve? What would you want to eat here? Think in both categories "dinner" and "snack".

We don't have a grill, or gas, or a hood, which means we are limited to things you can make without open flame or a vat of grease: microwave, hot-plate, and toaster oven, basically. (And a majority of the food needs to be prepared on-site, for permit reasons.)

Drunk people, of course, like the grease. But putting in the kind of exhaust hood we'd need for that would have been an additional $20,000! Shoot me.

It's been incredibly frustrating around here lately; I walk around and see thing I want to fix, or improve, or just change for the sake of variety, and it all costs money that we don't have.

After 9 years of effort, involving hundreds of folders all over America, the Business Card Menger Sponge was completed. The resulting object is comprised of 66,048 cards folded into 8000 interlinked sub-cubes, with the entire surface paneled to reveal the Level 2 and Level 3 fractal iterations.

On Sunday Sept 10, Dr Mosely will present a lecture on the logical challenge of decomposing this fractal form into manufacturable subunits and on the structural considerations of building such a large object out of business cards.

Dr Jeannine Mosely trained as an electrical engineer at MIT and is a leading practitioner of business card origami. In the emerging field of computational origami, a branch of mathematics that explores the formal properties and potentialities of folded paper, her research focuses on the use of curved creases.

16 years ago
"It is nice to see you."
15 Comments
Tags: parts, perversions
Current Music: Finitribe -- Put Your Trunk In It ♬