Researchers have shown that damage to a small but very specific brain area can wipe out an addiction to smoking.

The insular cortex is a relatively primitive part of the brain whose functions include providing an emotional context for experiences, such as drug taking, along with some higher-level, decision-making functions involved, for example, in forming memories.

Bechera's experience with these patients supports his hypothesis that addiction is caused by an imbalance between two neuronal systems -- the impulsive system controlled by a brain area (the amygdala) that helps to process emotions and a reflective system controlled by the forebrain. The reflective system anticipates and assesses the consequences, good or bad, that any action will have for the future. Most addiction research focuses on the impulsive system.

but is it vegan?

17 years ago
GM spray could keep dentist at bay

A single dental treatment that involves spraying genetically-modified bacteria into a patient's mouth could cut the risk of cavities by up to 90%. The spray, which could be on the market in as little as three years and should last a lifetime, contains bacteria similar to that found naturally in the mouth - with one crucial difference. The natural bacteria, streptococcus mutans, produces lactic acid that eats away at teeth, causing decay, whereas the GM bacteria does not. Planting the new form inside the mouth means the natural kind cannot get a foothold, so only one application would ever be needed.

"The capuchin has a small brain, and it's pretty much focused on food and sex," says Keith Chen, a Yale economist who, along with Laurie Santos, a psychologist, is exploiting these natural desires -- well, the desire for food at least -- to teach the capuchins to buy grapes, apples and Jell-O. "You should really think of a capuchin as a bottomless stomach of want," Chen says. "You can feed them marshmallows all day, they'll throw up and then come back for more." [...]

What he witnessed was probably the first observed exchange of money for sex in the history of monkeykind. (Further proof that the monkeys truly understood money: the monkey who was paid for sex immediately traded the token in for a grape.)

Glistening Fatberg Lurks in the Dark Places Below

The hunt for the killer hairballs

There is one story that many flushers in London like to recount. It concerns a fat iceberg that had been building up below Leicester Square over the course of a whole decade. Eventually, this 150-square-foot "slug of hardened fat" grew so large that it was impassable. A gang of flushers armed with supersucker machines spent six weeks one blazing summer trying to dislodge it. By the time they finished they were reduced to using ice picks to hack away at the white mountain.

"It looks like a huge packet of lard. It shines in the dark and gives off this phenomenal transparent heat. Within ten minutes, as soon as you stick a shovel in it, you could slide through. The water comes at you like a dyke. The risks are colossal. Later, an animal food company got in touch because they wanted to buy and recirculate the fat." 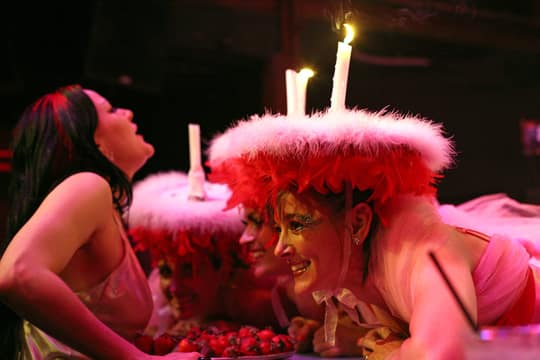