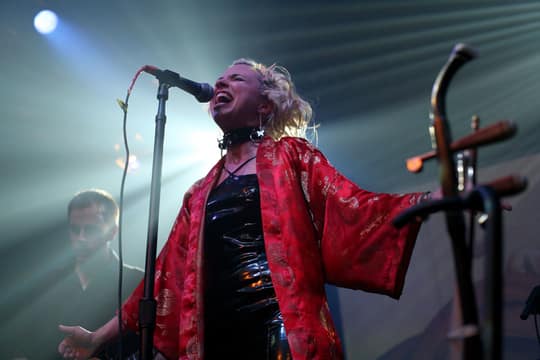 Photos are up of the Drop Black Sky show. They put on a great show -- I like that band a lot. The juggler was very funny.

You may have noticed that the audio archives have only had one channel for the last few weeks. You would probably assume that's a simple matter of replacing a cable; turns out, not. As far as we can tell, the audio going into the computer is stereo, and somewhere in there, it drops (most of) the right channel. So, bad connector, right? No, we've tried four different sound cards, and checked the mixer settings. At this point it seems like the last time we (accidentally) upgraded ALSA, it introduced some software bug that is making one channel go away. I can't even fathom how such a bug could exist, but that's Linux for you.

I'm almost fed up enough to start replacing these various machines with Mac Minis. I'd still have to run much of the same flaky software on them, like Icecast, LAME, and (shudder) RealProducer, but at least I'd get to stop chasing the moving target of "your computer is our learning experience" Linux device drivers. But since Minis are basically laptops, they'd all immediately melt down in the 95°+ weather in the office, since we're still incapable of figuring out how to cool this room. And they're a lot harder and more expensive to repair than random anonymo-junk PCs.

Oh, also: it's six months later and we still don't have a kitchen. And now our contractor and plumber have both gone on vacation. Have you ever seen water actually come out of the middle sink in the men's room? Me neither.

Warriors of the future will 'taste' battlefield
("tastes like victory")

By routing signals from helmet-mounted cameras, sonar and other equipment through the tongue to the brain, they hope to give elite soldiers superhuman senses similar to owls, snakes and fish.

A narrow strip of red plastic connects the Brain Port to the tongue where 144 microelectrodes transmit information through nerve fibers to the brain. Instead of holding and looking at compasses and bluky-hand-held sonar devices, the divers can processes the information through their tongues, said Dr. Anil Raj, the project's lead scientist.

In testing, blind people found doorways, noticed people walking in front of them and caught balls. A version of the device, expected to be commercially marketed soon, has restored balance to those whose vestibular systems in the inner ear were destroyed by antibiotics.

Michael Zinszer, a veteran Navy diver and director of Florida State University's Underwater Crime Scene Investigation School, took part in testing using the tongue to transmit an electronic compass and an electronic depth sensor while in a swimming pool. He likened the feeling on his tongue to Pop Rocks candies. "You are feeling the outline of this image," he said. "I was in the pool, they were directing me to a very small object and I was able to locate everything very easily."

So colourful and exotic is the list of substances that have been claimed to heighten sexual appetite that it is hard not to feel a twinge of disappointment on first beholding the latest entry - a small, white plastic nasal inhaler containing an odourless, colourless synthetic chemical called PT-141. Plain as it is, however, there is one thing that distinguishes PT-141 from the 4,000 years' worth of recorded medicinal aphrodisiacs that precede it: this one actually works. And it could reach the market in as little as three years.

The full range of possible risks and side effects has yet to be determined, but already this much is known: a dose of PT-141 results, in most cases, in a stirring in the loins in as little as 15 minutes. Women, according to one set of results, feel 'genital warmth, tingling and throbbing', not to mention 'a strong desire to have sex'.

The precise mechanisms by which PT-141 does its job remain unclear, but the rough idea is this: where Viagra acts on the circulatory system, helping blood flow into the penis, PT-141 goes to the brain itself. 'It's not merely allowing a sexual response to take place more easily,' explains Michael A Perelman, co-director of the Human Sexuality Program at New York Presbyterian Hospital and a sexual-medicine adviser on the PT-141 trials. 'It may be having an effect, literally, on how we think and feel.'

Two years earlier, and just three years past its start-up, the company had bought the rights to develop a substance called Melanotan II. Originally isolated by University of Arizona researchers looking for a way to give Caucasians a healthy, sunblocking tan without exposing them to dangerous ultraviolet rays, Melanotan II achieved that and more: it also appeared to facilitate weight loss, increase sexual appetite and act as an anti-inflammatory, too. Quickly dubbed 'the Barbie drug', Melanotan II seemed too good to be true.

In fact, it was too good to be good. A drug with so many effects, Palatin decided, was not an effectively marketable one. So Palatin's researchers set out to isolate the individual effects in the laboratory, experimenting with variations on Melanotan II's molecular theme. The compound that became PT-141 was one of the first variations examined.

'I see a lot of couples in my practice who don't know how to relax,' says Leonore Tiefer, a professor of psychiatry at New York University School of Medicine. 'That's fine - it's a big asset to them in their corporate lifestyle, where they can work 80 hours a week. They're trained to multi-task. Well, it doesn't seem that that is really doable when it comes to sex. And they're angry about that: they need it to be doable because they only have their five minutes.'

The five-minute meaningful sexual encounter: if ever there was a holy grail for the age of the tight-wired global economy - with its time-strapped labour force and its glut of bright, shiny distractions - that is it. And if ever there was a reason to be wary of the pharmaceutical industry's designs on the market for sexual healing, say critics such as Tiefer, it's the attractiveness of that simple-minded ideal.

And here's a fine out-of-context quote:

'He notices it's there, and he grooms it to detumescence,' says Annette Shadiack, Palatin's executive director of pre-clinical development. 'And then it happens again.'

17 years ago
Spaceship Junkyard: some amazing photos of the Grim Meathook Future by Jonas Bendiksen:

ALTAI, Russia - Villagers collect scrap from a crashed spacecraft, surrounded by thousands of white butterflies, 2000. Environmentalists fear for the region's future due to toxic rocket fuel.

KAZAKHSTAN - The booster engine section of a crashed Soyuz craft, 2000.

ALTAI, Russia - A farmer takes an evening stroll past the wreck of a Soyuz spacecraft, 2000. In this farming village, rockets routinely fall into people's back yards.

KAZAKHSTAN - Scrap-metal dealers wait for a rocket to crash, 2000.

KAZAKHSTAN - The fiery wreck of a rocket after crashing, 2000.

ALTAI, Russia - A man cuts a wrecked spacecraft to sell off as high-grade titanium alloy, 2000.

KAZAKHSTAN - A Soyuz rocket-fuel tank lies on the steppe, 2000.

Please let me know if you find either of those to not be the case.

I think this is getting really close to being called a non-beta release, since at this point I'm not sure I'm not sure I'm going to be able to make any further headway on performance. I'm pretty much out of ideas on that front, short of "throw away most of the work I've done so far, and re-implement Xlib in terms of OpenGL instead of in terms of Quartz". Which, as you may imagine, I'm not particularly eager to do.

The reason it works on Intel Macs is that Apple finally replaced my busted iMac, and the replacement is an Intel Core Duo. And it is OMG fast! Seriously, it seems like compilations are around 2.5× faster than before, and all the screen savers run way faster too (so there goes any hope of having decent xscreensaver performance on slow machines, since I won't even be able to tell there's a problem any more...)

The one exception to this speed-up is, of course, Photoshop. Photoshop is a fucking dog, since Adobe still hasn't released an Intel build of CS2, meaning it runs in the PPC emulator. It feels like it's running at 75% to 50% of the speed it ran on my PPC iMac, and it uses a truly gargantuan amount of memory. Like, after editing a dozen pictures, closing them all, and hiding Photoshop, minutes later it was still consuming 6% CPU and almost 1.5 GB RAM.

So if you use Photoshop more than XCode or other Apple-provided software, I'd say stay the hell away from the Intel machines until Adobe gets their shit together.