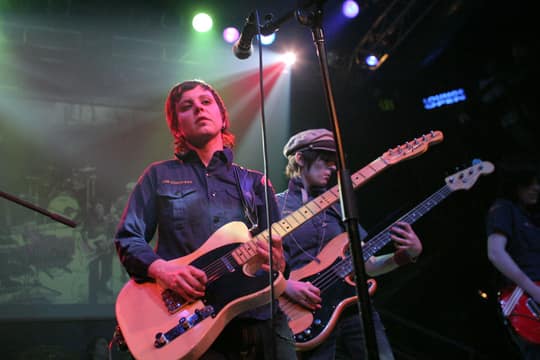 Photos are up of Boyskout (who were really good!) and the Vau de Vire Society at the last Pop Roxx.

You may have noticed that our webcasts haven't been working so well since we had to move our T1 back in October. It took us until just a few weeks ago to finally figure out what was going wrong. We were experiencing really high latency and packet loss, and had a hell of a time figuring out where it was coming from. It turns out that it was some combination of a bad router and bad cables in our new colo rack. Anyway, that's fixed now, so let me know if you still have trouble.

Surprisingly, I got almost no mail complaining about this, even though our webcasts were pretty much completely useless for about two and a half months. It makes me wonder whether anyone actually gives a shit about them. I mean, it was the end of the year, and not a lot of was going on, but still...

Some shitbag tagged the men's room mirror again. This time at New Wave City! Is there even anyone who goes to that party who's under 35? Does carving your name in someone else's wall impress the middle-aged ladies? So there goes another $400, at a party that we don't make any money at anyway. Thanks, asshole.

Since construction has finally begun, I might as well spill the beans about the Secret Construction Project I've been alluding to for the last year. We've had the permits for almost a year, and it took us most of that time to find a licensed contractor who was willing to do the work!

Anyway, perhaps you have noticed that the balcony bathroom isn't there any more, and the wall that used to contain its door has moved. That room is being converted to a kitchen.

We haven't totally settled on a menu yet, but it'll probably be something along the lines of sandwiches, hotdogs, and wraps -- basically, stuff we can make with a microwave and toaster oven. We're not installing an oven, grill or fryer, because that would cost like an extra $15K at least.

This does not magically mean we'll be able to do 18+ shows. To do that, we'd have to relinquish our "bar" liquor license and get a "restaurant" liquor license, which is a pretty big deal. But as I'm sure you can imagine, it's something that's on our mind. At the rate these things tend to go, I wouldn't expect any activity along those lines for at least another year.

(Please don't bug Barry about this. He doesn't want to answer all your dumb questions.)

GLTerminal is an OSX terminal emulator that pretends to be an old 80x24 terminal. Download OSX executable. Originally written by James McCombe.

It's pretty sweet, though not as faithful a simulation of a CRT as Trevor Blackwell's fantastic Apple ][ screen saver (in xscreensaver).

(GLterminal is a little broken: after starting it, go to Preferences and select "Renderer: Classic Terminal" to make it go.) (Also, most inappropriate fanboyriffic application icon evar.)

I should also probably mention that the Apple ][ screen saver also functions as a terminal emulator:

Other fun things to do with it:

"Effective January 27, 2006, Western Union will discontinue all Telegram and Commercial Messaging services. We regret any inconvenience this may cause you, and we thank you for your loyal patronage."

The world's first telegram was sent on May 24, 1844 by inventor Samuel Morse. The message, "What hath God wrought," was transmitted from Washington to Baltimore. [...] Western Union goes back to 1851 as the Mississippi Valley Printing Telegraph Company. In 1856 it became the Western Union Telegraph Company after acquisition of competing telegraph systems. By 1861, during the Civil War, it had created a coast-to-coast network of lines.