Since restoring my iMac from backup, every time I try to sync my iMac and my Treo, it says something along the lines of, "Syncing with phone will change more than 5% of your Calendars on this computer. Add: 1158. Delete: 0. Modify: 3. Ok?" And sure enough, if I say "Ok" it duplicates every event in my iCal. Each time.

Update: "iSync / Devices / Reset All Devices" sounded promising, but it just caused the Treo to start rebooting every time it tried to sync the calendar. So I did a memory-wiping hard-reset of the device (hold down Off for ~10 seconds while pressing the reset button by the battery) and that let it reinstall everything. (Except that for some reason, Snapper Mail made me re-enter my account info). So, it's fixed now... for now.

Update 2: The new version of Missing Sync is out now, and comes with its own conduit that fixes most of the complaints I had about fields not being synchronized. To get it to install I had to go through the "reset the device, reinstall Snapper" dance again, but now there's a lot more data in my phone's address book and calendar, which is very nice.

17 years ago
Photos are now up of Front 242 and Grayarea. Grayarea were a rock/punk band; they weren't bad, but didn't really grab me. 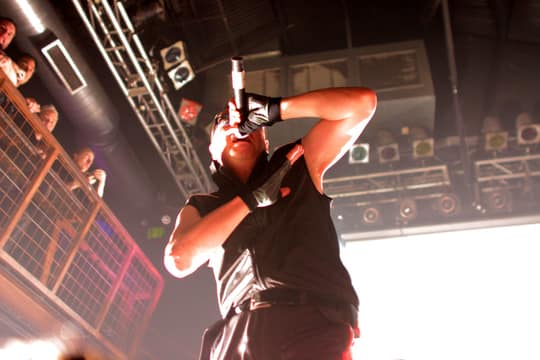 This is a band who have been one of my favorites for over twenty years. In fact, they were one of the reasons I bought this nightclub. When they came to San Francisco in 1998, they played at the (late, unlamented) Maritime Hall. I absolutely hated that venue: seeing a show there was like seeing a show in a high school gym (upstairs) or a high school cafeteria (downstairs), both with decor and acoustics to match. I was not going to see another one of my favorite bands there and have the experience ruined by that shitty venue yet again, so instead I flew to Seattle to see them play there.

My decision to take that trip was what caused me to finally realize that I should take action: since the club scene here in SF wasn't getting any better on its own, I took leave of my senses and decided to try and fix it myself. That week, I started looking for a nightclub to buy and reanimate, and the rest is history.

We actually tried to talk them into playing on our opening night in 2001, but they weren't interested.

Anyway, about the show... 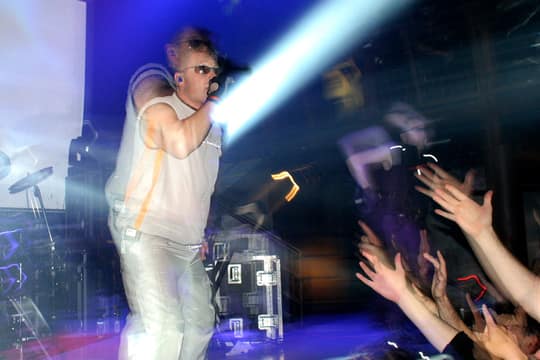 They played mostly older material: it was very much a "greatest hits" performance. It felt very much like the first time I saw them, back in (I think?) 1989 at The Warfield, which at the time was the best show I had ever seen in my life. This time I was not so impressed, which makes me sad, because it's not that their show has changed, it's that I'm no longer a hyperactive little kid. I enjoyed that first show on the basis of the intensity of the crowd, and didn't much care that the show almost entirely consisted of a pair of MCs jumping around. Both that time and this time, they had a live drummer, and there was some playing of keyboards going on, but it wasn't really a "live show" situation. And these days, I care about that a lot more than I used to.

Another difference is that I've been seeing every fucking "industrial" band in the world rip off Front 242's act for 15+ years now, and none of them are nearly as good. Yeah Grendel, I'm talking to you. You too, E-Craft. You too, Funker Vogt. As a result, that act has lost a lot of its oomph.

So, I enjoyed the show, but I spent a lot of time trying to figure out why I didn't enjoy it more, and the only conclusion I could come to is, "I've gotten old."

(Also I shouldn't have tried to take pictures, I should have just watched the damned show instead.)

Do yourself a favor and pick up (at least) "Still + Raw". It came out almost two years ago, and it's incredibly good and nobody has heard of it. And amazingly, they weren't selling any CDs at the merch table! Only t-shirts and their new live DVD. Weird.

There were these three meatheads in the audience who were really making friends. If you've ever been at a show with a mosh pit, you know the type: you'll have a hundred average-sized people bouncing around and having a good time, and then there are these three 6' tall 300 pound football-player-looking skinhead jackasses who came there with apparently no goal other than to demonstrate that, yes, they really are bigger than everyone else. Watch them ram their way in front of short people. Watch them grab girls by the throat. I had one of them thrown out halfway through the first song, and the other two got themselves thrown out eventually, but not before they'd managed to piss off pretty much the whole front third of the room. Thanks, guys. Everyone really appreciated it.

17 years ago
It has only just come to my attention that Henry Rollins is doing his spoken word stand-up comedy routine on Tue Nov 8 at the Palace of Fine Arts. Highly recommended: he is quite possibly the funniest man alive. Certainly the funniest man with the largest neck. The tickets I just bought ended up in the very last row, so hurry. (Alas, it's TicketBastard.)
26 Comments
Tags: firstperson, music
Current Music: Mission of Burma -- Eyes of Men ♬