Stressed Baboon and Son: "A baboon mother's `over-zealous' grooming of her baby to baldness at a Devon zoo is a sign of stress, says an animal rights group. Reggie the hamadryas baboon has had his hair licked and plucked off by his mother at Paignton Zoo. Now PETA has called on the zoo to stop hamadryas baboon breeding. The zoo rejected PETA's call and said the baboons showed no signs of stress." 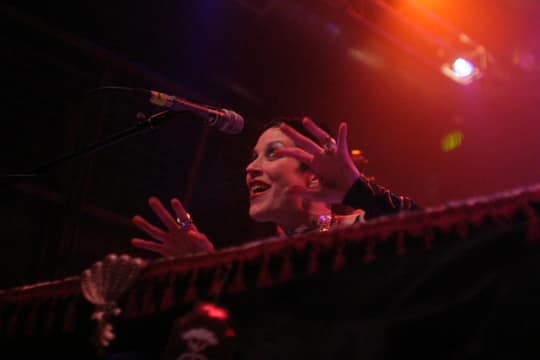 Photos are up of Meat and of the Voltaire + Jill Tracy show.

Jill Tracy was awesome, as always. I enjoyed the between-song banter of Voltaire's set more than the actual show, because while he's a funny guy, I generally don't like comedy music. Especially when it's filk. Yeah, that's right, he performed accoustic guitar songs about Star Trek. That sort of behavior hurts me real bad inside.

You may have noticed that the RealVideo webcast hasn't been working for the last few days. The upstream server isn't responding, and I have no idea why. Nothing has changed, so I'm hoping it just fixes itself eventually.

Comment at DNA Lounge
Tags: dnalounge
Current Music: Liars -- The Garden was Crowded and Outside ♬

17 years ago
Remember the ten two hundred fifty thousand superballs bouncing down Kearny Street? The commerical they were making is out. It looks pretty cool. Shame about the hippie music, though.

San Francisco made of Jello

(MPEG: who knew earthquakes could be so wiggly and delicious?)

Drunk of the Week: Toi Sennhauser

"Yum, yum, yum! Look at that great big frothy glass in Toi's hand. Wouldn't you just LOVE IT if a beautiful girl in a freaky cleavage-poppin' Oktoberfest outfit handed you a nice icy cold beer RIGHT NOW? Mmm, beer! Would you still drink it if I told you that Toi made that beer with yeast from her own vagina? That she made a keg of homebrew, called "Toi Sennhauser's OPB -- Original Pussy Beer"? Hmm, would you drink it then? Plenty of people were drinking the OPB at Toi's event at Crawl Space Gallery this past Saturday. I'm told that several people even got bonafide drunk."

"Experimentation with these historic staple foods, in combination with my own body, helps to build a new artistic dimension."