16 years ago
This guy stuck 50,000 speech bubble stickers on posters around NYC and then took pictures of what people wrote in them:

16 years ago
How far should fingerprints be trusted?

The so-called "50K study" took a set of 50,000 pre-existing images of fingerprints and compared each one electronically against the whole of the data set, producing a grand total of 2.5 billion comparisons. It concluded that the chances of each image being mistaken for any of the other 49,999 images were vanishingly small, at 1 in 1097.

But Meagher's study continues to be severely criticised. Critics say that showing an image is more like itself than other similar images is irrelevant. The study does not mimic what happens in real life, where messy, partial prints from a crime scene are compared with inked archive prints of known criminals. [...]

He wrote that critics misunderstood the purpose of his study, which sought to establish that individual fingerprints are effectively unique - unlike any other person's print. "This is not a study on error rate, or an effort to demonstrate what constitutes an identification."

[...] From these Cole estimates that false matches occurred at a rate of 0.8 per cent on average, and in one year were as high as 4.4 per cent. Even if the lower figure is correct, this would equate to 1900 mistaken fingerprint matches in the US in 2002 alone.

But on CSI, the evidence is never ambiguous, and they always get a confession before the end of the episode! Real life is so unfair!

a mighty ruckus at islais creek 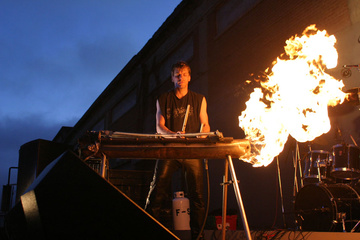 There were a bunch of bands down in the superfund toxic wasteland of Detroit Hunter's Point this weekend. The bands were set up outside on a flatbed truck at the end of a road that dead-ends into sewage and carcinogenic toxic waste. Rock on! (Note to my friends who live there: move.) Anyway, it was great fun. I took some pictures.

Plastination: Hi Tobias. Look over there!

Smash Up Derby: I liked these guys the last time I saw them, but this time they did nothing for me. It might just be that I'm that much more sick of mashups now, but I think they just didn't sound very good this time.

Babyland: Ok industrial band. They are two guys plus backing tracks. The drummer is fantastic, and uses random bits of metal instead of actual drums. The singer is manic and entertaining, but screams in exactly the same style on every song, which I find irritating.

F-Space: I thought these guys were awesome (and not just because they use fire). One of the guys primarily played this thing that seemed to be a bunch of big springs stretched over a metal table that periodically spat fire. The music was heavily distorted and drumming heavy; old-school industrial, sort of in the Crash Worship vein, but less tribal.

And later that night at The Independent:

Invisible Ballet: Really great! Invisible Ballet is Rebecca and Ryan from Halou, doing more of a synthpop thing than the sorta-triphop of Halou. This time, they also had Evan and Shawn from Battery playing with them, which was cool.

Then New Model Army again, this time with the full band. They were great, but the club's sound was crap. This was unexpected, because it sounded fine for Invisible Ballet, and it sounded great there when I saw Tackhead. Despite the sound issue, I think I prefer NMA's accoustic sets. They seem a lot more powerful and emotional.