A group of private-school students end up trapped in an underground bunker, and a shrink tries to get the story of what happened out of one of the girls (Thora Birch, who is great). The story is re-told several times, Rashomon-like, and it gets uglier with each telling. It's very tense, and I liked it a lot.

Charlize Theron plays an ageing tweaker prostitute who, while trying to provide for her needy, underage girlfriend (Christina Ricci) gives up prostitution in favor of murdering johns. Theron won an Oscar for this, and it was well-deserved. She's amazingly creepy and believable.

Shaun of the Dead:

I put off seeing this for a long time because, fan of zombies though I am, I thought the preview looked really, really stupid. I didn't even smile at one of the jokes in it. But, the movie is actually pretty entertaining!

I had never seen this, and every now and then it would come up and someone would say, "you haven't seen Falling Down? It's a classic!" Well, I'm sorry, people, your memories of this movie far outstrip its quality. It is complete garbage. It is wall-to-wall clichés, starting with "it is Hero Cop's last day before retirement" and going downhill from there. The racial stereotypes were especially bad: I kept remembering a scene in Hollywood Shuffle where Robert Townsend was trying out for a role, and they kept asking him to act "more black". This could have been the movie he was thinking fun of!

The movie is an extended revenge-fantasy, but it's the fantasy of a writer who is just a dick.

I was ready to stop watching after about 10 minutes, but my friend was captivated by the sights of the early 90s LA strip malls and freeway construction. I didn't know you could be nostalgic for that kind of thing, but apparently you can.

Dumb fun. Not as good as the first one (which was... not great, but entertaining.) Very near the beginning, a skinny blonde woman dressed as a nurse rips open her coat and proceeds to aerate the building with machine guns while wearing only soaking wet lingerie. That kind of sets the tone for the rest of movie. There is some decent fight choreography. Unfortunately there's also a precocious child, and an almost complete disregard for the laws of physics. The level boss ending is somewhat anticlimactic.

The Exorcism of Emily Rose:

A girl dies during an exorcism, and the priest is on trial for murder. The story is told mainly in flashbacks to the big event. This was pretty good; it was suspenseful without too many spring-loaded cats. It was interesting how the telling of the story managed to remain fairly noncommital on the question of "was it demons, or epilepsy?"

But man, religious people are weird. It always seems like they've heard of Occam's Razor, but they just don't quite get how it works! They kept saying things like, "God allows people to be posessed to prove to others that God exists". Well you know what, if God really wanted to prove that he existed, I don't think he'd have any trouble doing that, being God and all. Instead of making a statue bleed in front of some backwoods hick, why not make ten thousand statues bleed at the same time? It's fuckin' God! So the obvious, clichéd answer to that is that God doesn't actually want to provide proof, because he wants people to have faith (AKA "believing something for no reason at all"). In which case, posession proves nothing except that, well, God's kinda mean.

In fact, providing proof of God would be more up the Devil's alley, wouldn't it? Proof would destroy faith. So is God skulking around like the Men In Black covering up Satan's spoilers?

Also there was some nonsense about 3AM being "the witching hour" because Jesus came back from the dead at 3PM. Which immediately made me ask, what time zone is God in? And does he follow Daylight Savings Time?

Maybe I could just Google this, but why are Catholics always seeing Mary instead of Jesus? Is she like the Press Secretary or something? Or is she more like Karl Rove?

16 years ago
Regarding that idea I had:

No joke: I helped some guys from Upright Citizen's Brigade pitch this to Comedy Central. We did a live version for them at the Comedy Central Workspace earlier this year.

It was AWESOME, and hilarious, and I got to sit close enough to Paget Brewster to pretend that she was in love with me, but CC didn't pick it up.

There's a tape of it, that should /really/ find its way to the internets.

Which forces me to ask... why does Comedy Central hate America?

16 years ago
You may have noticed that there are a whole bunch of "celebrity poker" shows on television these days, where a group of famous people sit around playing cards and being snarky at each other, and they film the whole thing. I can't imagine too many things more boring than watching someone else play cards, but I guess fishing has a rich TV history too... Anyway, I have an idea, and hopefully one of my many readers in the entertainment industry will make it a reality:

I want to see a TV show where the flying camera crane zips around the table where Wil Wheaton, Puff Daddy, Michael Madsen, and Lindsay Lohan play D&D. I would totally watch that.

"Yo, I'm-a gonna get all up in that orc's face with my Magic Missile. Jack you up, orc!" Then then announcers banter, "oh, Magic Missle! A bold choice, he might need that later. Here comes the roll..."

It would be GLORIOUS.

Update: Mr. Wheaton points out that there is nothing new under the sun...

It's offered to your attention the "space pants" for macaque small monkey to wear it during the experimental space flight. This pants has been used for animals (monkeys) experiments in 1950-s - 1960-s in the USSR Institute of Biomedical Problems (IMBP, Moscow). The monkey's "space pants" are designed with many clasps to fit bigger or smaller monkey. Below are the front and the back views.

DNA Lounge: Wherein KNOWING IS HALF THE BATTLE!

16 years ago
You know what's sad? That there are some alcohols that we hadn't been carrying because they're too good. The theory goes that there are certain alcohols that are only ordered by people who are getting free drinks: people will ask for it if they have a drink ticket, but if they have to pay for it, they won't. So we end up buying these bottles that cost us twice as much as the regular stuff, and then giving it all away. Examples include Patrón, Fernet, Chartreuse, Captain Morgan Private Stock, and pretty much all the high end whiskeys.

Well, we're trying an experiment, and we've got the good stuff at all of the bars now. Please don't spoil it for everybody, ok?

This weekend we had a reggae show with this guy called Sizzla. It sold out with a $30 ticket, so I gather he's popular or something. But the surprising thing that I learned a couple days before the show is that this Sizzla guy hates him some homos! Apparently most of his songs are on the topic of gay men, specifically, lynching them and set them on fire. Here's an article about him:

"Throughout the night, Capleton, Sizzla and others sang almost exclusively about gay men," Amnesty International reported in a May 17 alert. "Using the derogatory terms for gay men - 'chi chi men' or 'battybwoys' - they urged the audience to 'kill dem, battybwoys haffi dead, gun shots pon dem. Who want to see dem dead put up his hand' (kill them, gay men have got to die, gun shots in their head, whoever wants to see them dead, put up your hand)."

Also, isn't the entire function of reggae music to facilitate the consumption of pot? ("What did the Deadhead say when the drugs wore off?" "Hey, this music sucks!") How can a pothead even manage to be so aggro about anything? This is puzzling to me.

I suggested that maybe we ought to find a way to get the Sisters of Perpetual Indulgence up on stage to clown him, but that probably would have gotten someone killed. 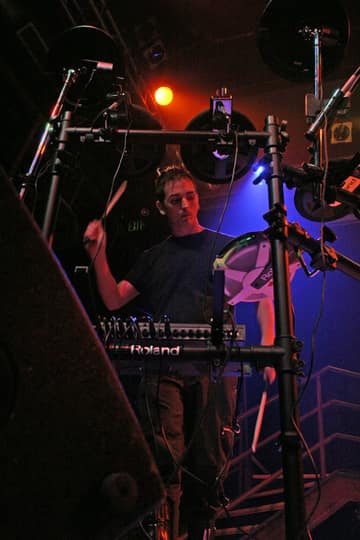 Photos are up of the Grendel + Equilibrium show.

Equilibrium were ok, but they didn't really grab me. However, it's Grendel I'd like to describe for you. I guess they played here before, but I had blanked them out completely. They consisted of a girl doing something inconsequential behind a keyboard, and a guy jumping around in a paintball outfit, shaking his fist and miming crucifiction -- or, as Jared so aptly put it, "it's good to see that Cobra Commander is still getting work."

It was really hard to watch, in that "I feel embarassed for you" kind of way. But there were about 15 people right up front who seemed to think it was the greatest thing ever -- even when the backing CD started skipping -- so more power to them.

Jess said: "Dear industrial music, We have to break up now. It's been over for years."

A gross creature which gobbles up a fish's tongue and then replaces it with its own body has been found in Britain for the first time.

The bug - which has the scientific name cymothoa exigua - was discovered inside the mouth of a red snapper bought from a London fishmonger. The 3.5cm creature had grabbed onto the fish's tongue and slowly ate away at it until only a stub was left. It then latched onto the stub and became the fish's "replacement tongue".