17 years ago
Where can I find an sshd for Tivo 4.x series 2? <LJ-CUT text=" --More--( 8%) ">Failing that, where can I find a version of tnlited that I can put a shell script wrapper around so that it asks for a password before handing out root shells like candy?

Or (dare to dream) iptables?

(The tnlited here seems to be S1-only, and the sshd linked to from here is 404.)

Failing even that, what magic do I need to go through to be able to cross-compile on x86 targeted to Tivo's brand of PPC? (Or, would it be easier to do this on OSX? Maybe if I link statically, OSX binaries will just work?)

my little friend, for one, welcomes his new robot overlord 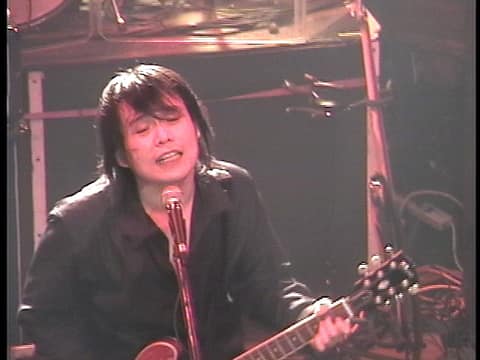 Within 24 hours, the top four Google hits for "Chocolate Syrup Wrestling" pointed to the above-mentioned event. I shudder to think what kind of coprophiliac traffic that's going to drive here in days to come.

Last night we had a show by this fellow named Wu Bai, who apparently fills stadiums in Taiwan, which I guess explains why so many people who didn't speak English were willing to pay sixty bucks a head -- we sold out!

My favorite part was how the flyer, in a classic Engrish moment, proclaimed him "King of Live." My least favorite part was how, not only did they plaster the walls of the club with banner ads (which, while hateful, isn't terribly unusual when TV and radio co-promotion is involved), but they also played commercials before the show.

I am not making this up. Before the band went on stage, they killed the music and played a DVD with ten minutes of Chinese commercials for ISPs and airlines and shit.

At first I assumed it was ironic.

Then my head exploded.

Anyway, the music was classic rock, totally unremarkable except for its non-English-ness. There was a pretty long article about this guy in the Mercury News this week (bypass the registration with BugMeNot.) Apparently there is "no one like him."

I only took a few photos; it was really crowded and I wasn't in the mood to force my way to the front.

The crowd were weirdly well behaved; not only did they throw away their own trash, but when someone left the crowd to go to the bar, their spot would still be waiting for them when they got back. I guess that was actually the strangest part of all.