18 years ago
Because of my recent Tivo adventures, I've had to re-enter my season passes twice. Since I wrote it down the second time, I figured I might as well post it, in the form of micro-reviews. "jwz uses and endorses television."

Things I Watch, But That Anger Me:

(Don't ask me why I watch them. I know I should just stop.)

Things I Don't Watch, But Feel Like Making Fun Of Anyway: 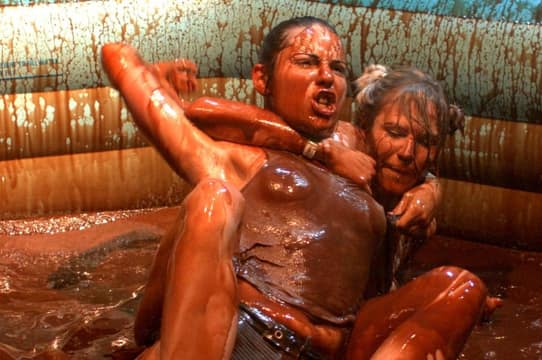 In accordance with our ongoing policy of trying to get our janitorial staff to quit (preferably in tears), photos of Thursday's Chocolate Syrup Wrestling event are up now.

This was probably the classiest event we've ever booked. Classy with a capital K.

Here's something that I have learned, and will share with you for your future reference: when you get chocolate syrup on your camera lens, it does not wipe off nearly as easily as whatever is in GWAR spooge. Sometimes it makes everything go all soft-focus, though, like Nurse Chapel.

Here's something that creeped me out, that I will also share with you: a moderately-sober-seeming girl in the audience dipping her finger into the wrestling pool and eating a big old blob of chocolate.

Now, I realize that this club has, in no small degree, broken my mind. I wash my hands too often. I open the bathroom door with a paper towel. I saw some of my own behaviors in "The Aviator", and it concerns me. But I still can't let go of the chain of evidence in this case, and must assume that that tasty fingerful of chocolate came with a side-order of week-old vomit, Hepatitis and Chlamydia.

People, please. Don't pick shit up off the floor and eat it. Especially this floor. You're giving me the willies.

In addition to sticky girls hitting each other, there was also a short set by a band (Late Night Sneaky). They had a pretty neat setup. There was a truly gargantuan screen hanging at the front edge of the stage. The band was (mostly) behind the screen and backlit (projecting silhouettes onto the screen), mixed with video of the band being projected on the front. It looked very cool. More Machine Than Man did a similar trick back in September.

Let there be no more talk of popes.
The only pope of any relevance was a furry.