18 years ago
I'll let you do the Googling for this one, too:

Concern over "miracle" creams, and a recent bare-breast promotion of one product, has prompted the Thai Health Ministry to campaign for breast-enhancement through exercise, the national news agency said Sunday.

The products were spotlighted last week after police charged three models and the makers of a "15-minute breast-enhancement cream" with indecent exposure after a bare-all demonstration. [...] The models exposed their bosoms, with only their nipples covered, for a massage with the cream, which is supposed to shape and firm female breasts.

Television news devoted extensive coverage to the event, while many newspapers plastered pictures of a bare-breasted model on their front pages.

TAMA, Japan -- A Japanese zoo prepared for animal escapes by chasing a volunteer dressed in a lion costume.

Zoo staff set up makeshift fences to contain the wild beast. If it was not a drill, the animal would be shot with a tranquilizer and quickly moved back to its cage habitat.

The annual costumed rehearsal is a favorite spectacle for zoo goers. Last year, the zoo practiced capturing a man dressed as an escaped polar bear.

All of the drills have been successful, zoo officials said.

I, for one, welcome our new biscuit-terminating robotic overlords

Staff at the Mcvitie's laboratory in High Wycombe, Bucks, designed the Crumb Test Dummy to test which baking techniques produce the most crumbs. The motorised mannequin has plastic teeth and is designed to replicate human eating.

"Eating lots of biscuits is obviously an enjoyable prospect for most people but we haven't yet found a human who can test on this scale," Mcvitie's brand manager Liz Ashdown added.

"The Crumb Test Dummy has a never-ending appetite and doesn't need to stop for breath."

She did not add, "And it absolutely will not stop until you are dead."

This woman has made it very clear that she wants us to see her breasts, and THE MEDIA will not show them to us!

"In an apparent protest against the monarchy, the woman had the message "Get your colonial shame off my breasts" scrawled across her chest and stomach. Reporters said the prince appeared to look in the woman's direction and smile as he entered the gallery."

Also, what's that on her head?

The Oregon Teacher Standards and Practices Commission is investigating a Central Linn High School teacher and coach accused of licking the bleeding wounds of his student athletes.

Reed remains a dean of students, science teacher and head football coach at the high school after being disciplined last year for licking the bleeding knee of an athlete. He acknowledged the May 2004 incident during school district and police investigations of another parent's complaint that he had licked blood from several students.

The Linn County sheriff's office found no basis for criminal charges in what Sheriff Dave Burright called "bizarre" conduct. The school district placed Reed on probation and required him to take a "bloodborne pathogens" course - a response some parents considered inadequate.

18 years ago
Jolene Blalock on Enterprise:

"I mean, we started out with 13 million viewers on the pilot, and we somehow managed to drive 11 million of them away."

There is an awkward silence when the subject of the final episode is broached.

"I don't know where to begin with that one," she finally stammers. "The final episode is... appalling."

We shall overcome drunkeness 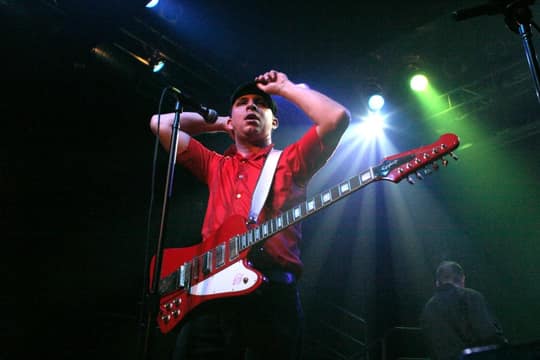 At one point, the singer for The Aggrolites mentioned that he had to get up very early in the morning to install tile somewhere, "so if you need any tiling done, give me a call." Barry and I looked at each other like, "Score!" because it turns out that we do need some tiling done. (We've got a lot of tiles to replace thanks to fuckhead vandals carving their little gangsta pirate names into our bathroom walls.) But, alas, they're from San Diego, and I doubt that commute makes it economical.

So hey, if you're good at tile, or a plumber, give us a call. You'd be surprised how hard it is to find people to do that kind of work who will return phone calls and/or show up when they say they will. 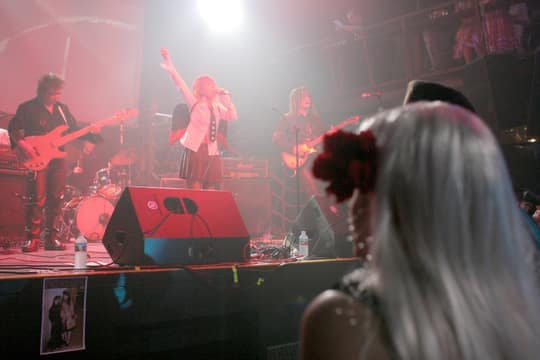 Also available for your perusal are photos of last night's Tokyo Dark Castle. It was a pretty good turnout for a Sunday night, and a lot of folks dressed up for it. (Beyond the folks who were in the fashion show, I mean.) Dressing up is good.

It's been a while since I've mentioned our ongoing battles with the video switcher. The most recent problem had been that the diskless computer that drove the switcher (via its serial port) had been flaking out a lot. That computer sat up in the DJ booth, and I guess it had just a little too much fog juice spilled on it or something. So we gave up on the idea of trying to make that work, and replaced that computer with a serial port to ethernet adapter. Now the video switcher is driven by a computer in the relatively luxurious back office. (It's tricky to do multi-hundred-foot serial line runs, but that's no problem for ethernet.)

Well, that was working great for a couple months, but now the dingus just keeps rebooting itself continuously. The wooden box it was living in is pretty warm, so I'm suspecting that it baked. Yay.