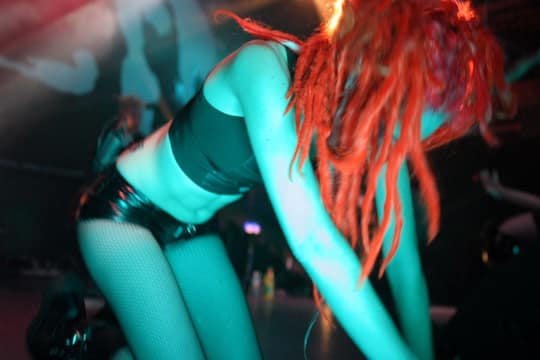 Photos of last night's Crüüüüxshadows + Tesseract7 show are up now.

I got a kick out of Crüxshadows for the first few songs, much like the last time they played here, but then I think my suspension of disbelief faded. Yes, I really think he's not joking. With the fake English accent, and the straight-outta-Spinal-Tap speech about pyramids or druids or whatever he was going on about. I think he's actually serious. (I know, it's so hard to tell any more in these post-ironic times. Half the time I can't tell whether I'm serious or not.)

When he was making his speech about all the places their most recent tour has taken them (wherein he mysteriously bragged about something along the lines of, "we're the only goth band to play in Latveria since the Sisters of Mercy did, way back in the Nineties!", and people cheered) I wondered if he keeps the sporadic English accent when he's in England? Maybe he switches to French?

Anyway. They had live guitar and violin again, and dancers in skimpy costumes. Like I keep saying, laptop bands take note: if you don't have a show, hire one.

We lost the webcast of this show, however. Someone screwed up something somewhere somehow, and since that put me in a firing mood, now everyone's passing the buck. Hopefully it's fixed now.

There's a pretty entertaining article in SF Weekly about noted surgery fetishist and wrecker of civilization Genesis P. Orridge, who will be here this Wednesday, Nov 3. Do not fear the man-boobies.

And of course, this Sunday is that most magical time of the year...