18 years ago
I just read a couple of books by Caitlin R. Kiernan, Threshold and the mostly-sequel Low Red Moon. They're both good: Lovecraftian themes but with believable characters who are there to do more than report and then go insane.

But, one thing that was driving me nuts while reading Threshold was that she kept doing this thing where she'd run words together like "pinkwhite" and "acidsour", and every time she did it, It would stop me, and I'd cringe. It was like it was triggering some autonomic proofreading reflex that I couldn't shake.

Anyway, just a few pages in to the second book, one of the characters is talking about the novel she's working on and says,

"Oh, you mean the way I liked to run words together to make new adjectives? Well, I don't do that anymore. It just kept pissing people off."

And there was much rejoicing!

18 years ago
This is probably a surprise to nobody, but owning a nightclub tends to suck right out of you any desire to go out to clubs other than your own. Those other clubs all start to look like "work" after a while, except you can't go in back and check your email when you get bored. So, despite that, I dragged my ass out to Du Nord tonight.

An illusion of which I have now been disabused: "Hey, the opening act is a puppet show, that might be entertaining." Unless by "entertaining" you mean "intolerably tedious." The second act was some godawful a capella off-key caterwauling that -- I swear -- might actually have been worse than Apocalypse Theatre.

So I was seriously starting to rethink the wisdom of this "leaving the bunker" plan.

But the headliner, The Dresden Dolls, were absolutely fantastic, and even made it worth suffering through the puppet show. They were two of them (drums and piano+vocals) and they played this agressive cabaret kind of thing. She has a great voice, the music was really complex, and they were very tight; lots of changes within a song and stop-on-a-dime silent bits. Very entertaining lyrics too: "Coin Operated Boy" was especially funny.

They have CDs for sale on their web site; as your attorney in this matter, I advise you to purchase them.

State of the Onion, and screen savers

18 years ago
The State of the Onion #8: Larry Wall's "State of the Onion" speeches are always really entertaining: they're nominally about the current state of Perl, but really they're about all kinds of things. The latest one was mostly about his recent health problems, but also about community, cognition, and design. This time, instead of slides, he ran screen savers and related the behavior of each to what he was talking about. 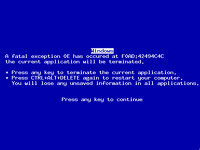 This particular screensaver fools me more often than I care to admit. The problem is that the more computers you've used, the more different kinds of crashes you've seen. And mentally, you classify them all in the "Oh, shit!" category, which is a category the brain is very efficient at processing.

On the other hand, the part of your brain that says "Hey, that's the crash screen for a different operating system, dufus!" -- that part operates at a much slower pace. The brain is chock full of shortcuts, and orthogonality be screwed. Optimizers cheat, and sometimes they get caught cheating. With this screensaver, you can catch your own brain's optimizer cheating.

DNA Lounge: Wherein you try to control your excitement over recent developments in our plumbing and plumbing-related program activities.

18 years ago
Hey, it's been a while since there have been any construction photos here, hasn't it? We had some plumbing work done this week: we added a few more floor drains to the balcony and lounge bars. They had been intermittently leaking through the floor for, oh, about two years now. The idea is that you put the drains at the low point of the floor, and assuming that our original plumbers did that (a big assumption, actually) the floors must have settled shortly thereafter, so water would pool up and eventually leak through, causing a mess downstairs. We fixed this a couple times by re-coating the tiles with some kind of waterproof sealant, but that didn't last very long, so we finally bit the bullet and had some new drains installed at the current low water marks. Friday night will be their test run. Wish us luck. Also, we added a shelf to the wall under the stairs, where the auxilliary bar goes. (In case you hadn't noticed, we have a second small bar in the main room that we roll out on especially busy nights.) The shelf behind it means it can be more fully stocked now. I imagine the shelf may also be useful at shows, when there's a merch table there instead. It folds up against the wall when not in use. You are excited by this dramatic news, I am sure.

18 years ago
The Manchurian Remake:

This was really a great movie: I was surprised how much I liked it. Normally I avoid remakes, because they're usually just stripped down, pointless, point-missing retreads, especially if the original movie was any good. And the original is absolutely fantastic, so my first thoughts were "how dare they", followed quickly by, "how in the world are they going to make it make any sense post-Cold War?"

Well, they did it by making it be about Halliburton instead the Chinese and Russians, and borrowing liberally from Jacob's Ladder. It worked. I think the original is a better movie, but this version is definitely worth seeing.

18 years ago
Alien vs. Predator:

First, I note with surprise that there are only 12 hits for "alien vs predator" "slash fiction".

The effects are good. When Alienses are actually fighting Predators, it's pretty spiffy. Pretty much everything else sucks. They waste 30 minutes introducing you to boring characters who won't ever get another useful thing to say or do for the rest of the movie; the setup is contrived, the ending is stupid. Run towards the camera in slow motion!

I haven't read the Alien vs. Predator comics (I could smell the stink on that shit from a mile away) so maybe some of this made more sense there (but I doubt it.)

I enjoyed it while it was on, because big monsters hitting each other are cool, but it left a really nasty aftertaste. This is no Freddy vs. Jason. Hell, it's not even as good as Alien 3. It's probably better than Predator 2, though.

mommy, where do mannequins come from?

18 years ago
The Making of Lauren:

"I am Len Gifford. I work for a company called Rootstein making the original sculptures for display mannequins, like the ones you see in fashion shop windows."