19 years ago
"Any text containing vulgar or offensive words or expressions; any text that might be slanderous or libelous to individuals and/or institutions."
40 Comments
Tags: big brother, copyright, nscp
Current Music: Emergency Broadcast Network -- Shoot the Mac-10 ♬

As a quick-thinking senatorial aide switched on the Senate's public-address system and cued up the infamous "Seven Minutes of Funk" break, Mr. Leahy and Mr. Cheney went head-to-head in what can only be described as a "take no prisoners" freestyle rap battle. Despite the fact that both participants brought their A-game and succeeded in dropping mad scientifics, the bout seemed to end in a draw.

19 years ago
Well, last night was just all about the equipment failures... Our sound board crapped out just before the W.A.S.P. / Sparrow's Point / Push show last night, so we had to bring in a loaner. We were late getting doors open, and in the ensuing chaos, we didn't get the new board hooked up to the webcast until halfway through the second band's set. It was webcasting the between-bands music fine, but we lost all of Push and half of Sparrow's Point. 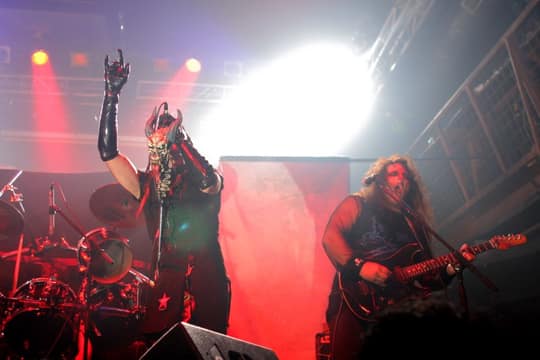 I took photos, but it was really difficult. It was pretty crowded up front, and W.A.S.P. had us rent barricades for in front of the stage. This made it pretty hard to get decent shots: those barricades make it hard to move around near them, and when I went on the stage side of the barricades to shoot, I was too close and was getting these great shots right up peoples' noses.

The barricades were totally unnecessary, of course. The crowd was enthusiastic, but there wasn't even a pit. We've had rougher goth shows here.

Then, when I got home, I found that 2/3rds of my pictures were toast: most of Sparrow's Point and all of W.A.S.P. were zero-length when I got them off the card. I don't know if the card got corrupted, or if this was the "your computer is our learning experience" Linux USB drivers screwing me again, but either way, zap.

So, we've got a big stack of those posters left. If you want to buy one, ask the next time you're at the club. We've got a bunch of the Sister Machine Gun posters left, too. (This selling posters thing, it's not working out so well.)

Do not frighten the citizens, over.

The official cover-up was ordered by San Diego Police Chief William Lansdowne [...] Under the new rules, uniformed police must ensure that their dress blues hide any tattoos, brands or "scarifications" that are "excessive," or visible over more than 30 percent of their biceps, forearms or hands. The rules also outlaw most inked skin renderings above the officer's collarbone, at a time when body art has become big business across the country.

The crackdown came after members of the public complained of excessively decorated police at community meetings and also after a few emergency calls. Some victims of crime were taken aback by the sight of extensively tattooed patrolmen turning up to help them, the chief said. "We have had complaints from citizens who called and said they didn't believe that (the cops) were police officers," he said.

DNA Lounge: Wherein you admire our bouncy castle, for starters.

19 years ago
As our auxiliary Halloween has come and gone, the kids decided we needed to have a secondary staff Christmas party, too. Also, it was our three year anniversary! Yay us. We had all the usual Christmas trappings at this party: a bouncy-castle, piñatas, and karaoke. (Well, the bouncy-castle was actually a car, but you get the idea.) Unfortunately, I forgot to schedule a webcast for that night, so we don't have an archive of the red hot karaoke action.

Photos of that, and of tonight's Glis / Regenerator / Ayria / Title show are now available for your convenience.

It's profoundly unsurprising that one might have trouble convincing ClearChannel to take your money for an anti-war billboard: I mean that's not even news, right?

But I just love this statement:

Meyer said the company generally does not run copy that would be unsuitable for children or cause them to ask difficult questions.

Those meddling kids and their difficult questions!

19 years ago
The movie comes with footnotes. That rules.
3 Comments
Tags: conspiracies
Current Music: The The -- The Sinking Feeling ♬