DNA Lounge: Wherein you listen to a humorous audio clip. 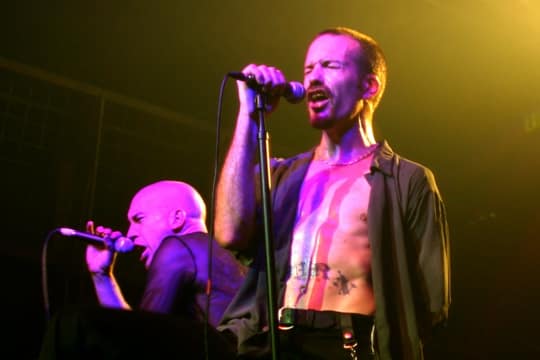 It was a fantastic show! Manufactura is one guy doing really good power noise; not much to watch, but he did seem to be playing, which is always greatly appreciated. Christ Analogue are hard industrial rock, mostly live, but with a lot of electronics in the mix too. They had two live drummers! They rocked. And Sister Machine Gun are long-time favorites of mine. they played a good mix of older and newer stuff, which was cool, because their style has changed a lot over the years. They started out as Pretty Hate Machine-influenced synthpoppy-industrial, but then started going in a much funkier Die Warzau-like direction.

Anyway, about half way through the show, SMG's singer made this hilarious speech which I will transcribe for you now:

So, everything we've played -- see, I give this speech every night, I mix it up a bit. We call it an "Audience Specific Interlude." Like, at this point, I'll say something about something tht happened to me in San Francisco.... and I'll make it "amusing..."

Anyways, everything we've played in this set up to this juncture, this crossroads, this... interlude... is released on Positron Records, which we own and operate, the representative of which [at the merch booth] will be happy to supply you with a fix in that regard, for a modest fee which will go toward letting us sleep in a hotel room instead of the van...

Everything after that juncture (that interlude) is released on Wax Trax Records. which means it's owned by -- actually it's not owned by TVT Records, it's owned by Credit Suisse. so technically speaking, the first four Sister Machine Gun albums are released on Credit Suisse, a Swiss bank, which is kind of cool when you think about it.

The point being, I don't get fuckin' paid for that shit, not a dime, not a single red cent. So you can go ahead and go home, and -- hey, you can download it right the fuck here, they got WiFi. Just get up on Morpheus or some fuckin' thing and get that shit for free.

Anyways, with that said, here we go.

What is that stuff on your site? Are there any other pages? Is it for sale? Just wondering.....

Harnessing the Power of Mad Science to Quash Dissent! [tm]

Weapons that can incapacitate crowds of people by sweeping a lightning-like beam of electricity across them are being readied for sale to military and police forces in the US and Europe.

A weapon under development by Rheinmetall, based in Dorf, Germany, creates a conducting channel by using a small explosive charge to squirt a stream of tiny conductive fibres through the air at the victim.

Meanwhile, Xtreme Alternative Defense Systems (XADS), based in Anderson, Indiana, will be one of the first companies to market another type of wireless weapon. Instead of using fibres, the $9000 Close Quarters Shock Rifle projects an ionised gas, or plasma, towards the target, producing a conducting channel. It will also interfere with electronic ignition systems and stop vehicles.

"We will be able to fire a stream of electricity like water out of a hose at one or many targets in a single sweep," claims XADS president Peter Bitar.

XADS is also planning a more advanced weapon which it hopes will have a range of 100 metres or more. Instead of firing ionised gas, it will probably use a powerful laser to ionise the air itself. This intense pulse - which is said not to harm the eyes - ionises the air, producing long, thread-like filaments of glowing plasma that can be sustained by repeating the pulse every few milliseconds. This plasma channel is then used to deliver a shock to the victims similar to a Taser's 50,000-volt, 26-watt shock.

The prototype software runs on a university virtual reality system that includes three projectors and a 9-meters-wide by and 2.5-meters-high screen curved to provide a 150-degree field of view.

The environment is a model of a psychiatric ward. The user is able to navigate around the environment using a mouse and keyboard, and can trigger hallucinations via hotkeys or clicking. Hallucinations also automatically occur when the user gets near certain objects.

Visual hallucinations include an abyss appearing where the floor should be, random flashes of light, the user's image in a mirror getting thinner and bleeding from the eyes, and an initially comforting but increasingly abusive Virgin Mary. Abusive voices that say things like "you're worthless" and "go and kill yourself" start at random and [in] proximity to items such as stereos and televisions. These occur simultaneously, giving the effect of many different sounds and voices interjecting and occurring simultaneously, according to Jorgensen.

The researchers' next step is to increase their library of hallucinations by interviewing more patients.

BOZEMAN, Montana (AP) -- A tractor-trailer overturned on a curve on a highway, spilling its load of hundreds of bee hives and unleashing some nine million angry honey bees.

The bees buzzed furiously as driver Lane Miller, his arm scraped to the bone, struggled to flee his rig after it overturned Monday in Bear Trap Canyon west of Bozeman. The truck slid across the highway before coming to a stop between guardrails.

"I had to kick the windshield out of the front of the cab and the bees were on me from that moment," said Miller, 41. "I've never felt so much fear in my life."