Biologists have linked a mysterious, underwater farting sound to bubbles coming out of a herring's anus. No fish had been known to emit sound from its anus nor to be capable of producing such a high-pitched noise. [...]

It was at this point that the team named the noise Fast Repetitive Tick (FRT). But Wilson points that, unlike a human fart, the sounds are probably not caused by digestive gases because the number of sounds does not change when the fish are fed. The researchers also tested whether the fish were farting from fear, perhaps to sound an alarm. But when they exposed fish to a shark scent, there was again no change in the number of FRTs.

There is also an anti-climactic WAV file...

16 years ago
When I first read this quote, I was sure it was a gag. But it's real!
Mary Bono, speaking to the House of Representatives:

"Actually, Sonny wanted the term of copyright protection to last forever. I am informed by staff that such a change would violate the Constitution. I invite all of you to work with me to strengthen our copyright laws in all of the ways available to us. As you know, there is also Jack Valenti's proposal for term to last forever less one day. Perhaps the Committee may look at that next Congress."
7 Oct 1998 Congressional Record, Vol. 144, page H9952. 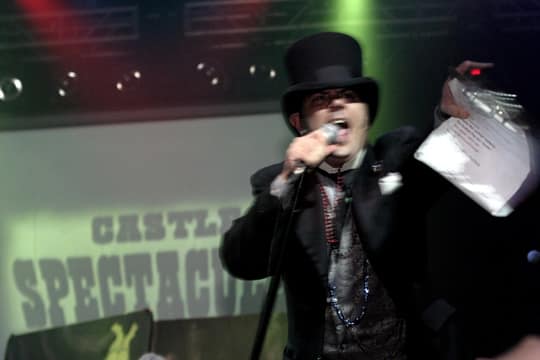 This year the "real" DNA halloween party was on Saturday, Nov 1, and it was just great. Those nutty kids from the Spectacular Spectacular crew put together an absolutely hilarious 50s-horror-movie themed vaudeville show. Zombies, vampires, wolf-girls, oh my. They also passed out many "tomatoes" (red and yellow plastic balls with felt leaves glued to them) with which the audience could express their opinions about the acts. There were many fabulous costumes. The evening is mostly a blur, though I understand my evil twin had a really good time. 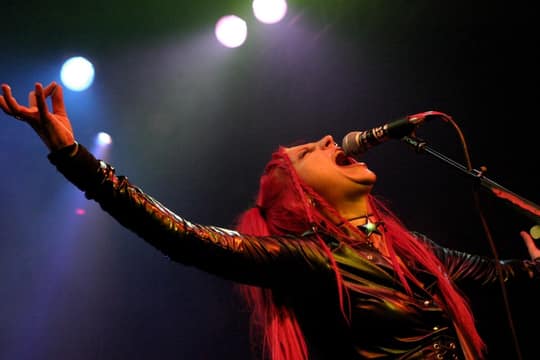 Monday we had a live show with Genitorturers, Hanzel und Gretyl, and Blue Period, which was also a great time (See photographic evidence.) I've been a fan of both Hanzel und Gretyl and Blue Period for years (and they've both played here before, in July 2003 and Aug 2002, respectively) so it was great getting to see them again. I hadn't seen Genitorturers before, but they put on a very entertaining show: lots of costume changes, bizarre characters coming out on stage throughout the night, and of course, the requisite bait-and-tackle show. They have a very devoted fan-base: it looked like the whole front row knew all the words to every song.

But I must warn you against ever accepting a lollypop from these people. Let's just leave it at that.

Speaking of live shows, David J has been added as the opening act for New Model Army on Tue, Nov 25. He was fantastic the last time he played here, so you know what to do...