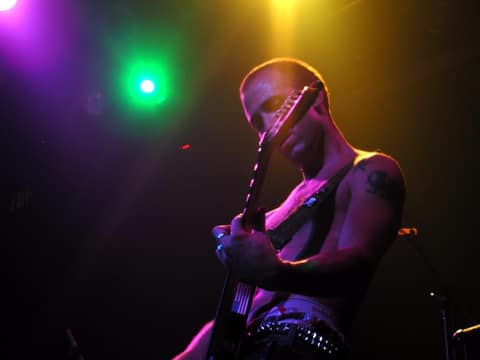 Photos of the One of Many / Karate High School / Simon Stinger show are up. It was a good time! I especially liked Simon Stinger, they were wacky. And they had synchronized, costumed gogo dancers, which is seldom a bad idea. If we could be doing shows like this once a week, I'd be a happy camper. It wasn't a big turn-out, and we probably lost a little money on it, but not much. And it was live music, so that makes it ok.

The thing we're still missing is people with the time and connections to put the shows together. We regularly get email from small bands saying "we're going to be in SF in a few months, can we have a show?" and we have to tell them "not unless you can find someone local to promote it", because we don't have anyone to do all the rest of the work: finding opening acts, making flyers, going to the right events and handing out those flyers... Incidentally, Jason really wants you all to see this picture of him and DJ ?uestlove from a few weeks ago. Apparently they had some kind of question-mark bonding thing going on.