20 years ago
Photos of the Hanzel und Gretyl / Hate Dept / Voodou show are up. Angela's out of town, so you get to put up with my blurry photography again. I'm really starting to hate my camera: pressing the button and waiting three seconds before it actually takes the pictures is really getting old. This show seemed like it was comparatively well lit, too, and still my pictures came out as dark as always. Though there were a few times when I managed to get a good shot by counting in time with the lightshow strobes, and shooting at just the right time.

Anyway, it was a fantastic show. I really like Voodou (they opened for Thrill Kill Kult in October), and I've been waiting a long time to see Hate Dept again. In fact, I think the last time they played in SF might have been here at DNA, a couple years before we took over... They've been huge favorites since the first time I saw them at House of Usher in... 1994? Ah, nostalgia. Seibold's shtick always used to be to insult the audience as much as possible, and the best line this time was "I see you people are still wearing all black, just like the last time we were here. Anyone watch The Crow lately?" One of my friends commented on the reduced level of hostility by saying "they're more like Friendly Disdain Dept." 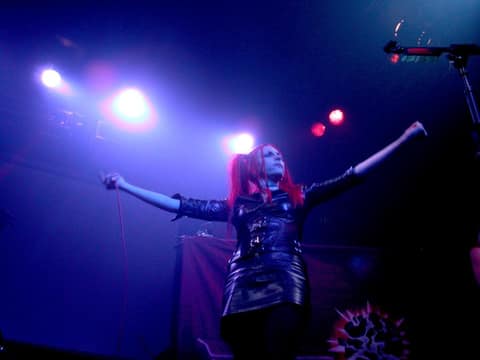 Hanzel und Gretyl were great too. I saw them the last time they toured (at the late, lamented Trocadero in 1997), but for some reason I can hardly remember it. They've got this sci-fi Nazi shtick going on now, which was really funny (though I've got to wonder how many people out there are just totally failing to get the joke.) Their show was super-melodramatic: it seemed like any time they changed position, it was from one album-cover pose to another. It was just great.

So, it's a good thing that I enjoyed this show so much, because it was one of those "sliding scale" shows: you know, the kind where it's a $15 ticket, unless your name is "Jamie Zawinski", in which case that ticket costs more like $2000. We expected a lot more people to show up than did, so we lost a bundle on this one.

I told you it was going to be a good show, didn't I, didn't I? Why don't you turkeys ever listen to me.

In sadder news, Georgia's calling it quits: Dulcinea, the restaurant next door, is for sale. She bought it just about a year ago, and opened in October. We're all pretty bummed about that; the food was great, and they got good reviews, but, well, money.

20 years ago
John Gilmore: I was ejected from a plane for wearing "Suspected Terrorist" button

"The steward returned with Capt. Peter Hughes. The captain requested, and then demanded, that I remove the button (they called it a "badge"). He said that I would endanger the aircraft and commit a federal crime if I did not take it off. I told him that it was a political statement and declined to remove it."