20 years ago
So, for those of you tuning in late, back in 1991 I wrote this program called XDaliClock, which is a clone of a similar program that I had on my Mac in 1984. I sold that machine in like, 1987, and I'd been halfheartedly trying to find another ever since, because I wanted a machine that was still capable of running the original Dali Clock. Well, back in April, cyantist bought me one! And tonight, I finally got around to getting the original Dali Clock running on it. That means that I now have a dedicated Dali Clock Appliance, made of the absolute wimpiest computer capable of generating that effect.

Even the original Palm Pilot (on which XDaliClock also runs) is a way beefier computer that the original Macintosh is: the screens are almost the same resolution, but the Pilot's CPU is at least 4x faster (maybe more?) and it had 1 or 2 megabytes of RAM. The Mac had 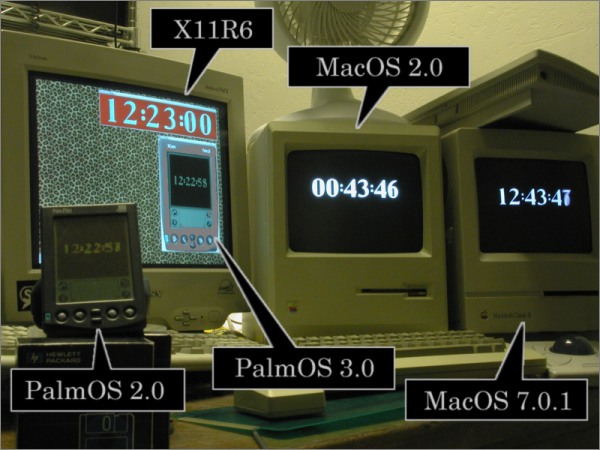 No, my office isn't crowded, why?

This was quite a production. I had files that purportedly contained the Dali Clock executable, that had been floating around in my home directory for a decade, and I needed to find a way to get those files onto the Mac.

The problems standing in the way of this:

So, here's how I did it. Barry loaned me a Mac that he had lying around (it's toaster shaped, but has a hard drive! Oh, BTW, you could get a hard drive for the original Macintosh: it plugged into the serial port.) I used the to format a modern floppy disk. I tracked down a USB floppy drive. I downloaded the files used an iMac, and wrote them to that floppy. (The iMac can read disks formatted on the but not vice versa.) I got the files onto the hard disk that way.

Then I had to figure out how to unpack the files, because there were several layers of decade-obsolescent packager formats wrapped around them, the trickiest of which was PackIt (which apparently only Jurassic versions of Stuffit Expander can read: versions which only run on Jurassic Macs...)

The original (Steve Capps) version of Dali Clock only works on the 128K Mac: it crashes the Classic after one second. However, in 1987, Ephraim Vishniac disassembled the original clock binary and hacked it to work on (then-) modern Macs. So (for the sake of completeness) I was able to get his version working on the (OS7.) Sadly, that version does not work on OS9 or OSX, though surprisingly, it doesn't crash OS9. It seems to be assuming a 1-bit display, so you just get some static at the top of the screen.