20 years ago
First of all, go see Red Dragon. It's really, really good. It's far better than Hannibal, which I really didn't think was all that good. And, I think it might actually be better than Silence of the Lambs, though it's been a long time since I've seen that. Anyway, it's great. The villain is complex and pretty believable. There's one predictable Hollywood Cliché at the end, but it doesn't really detract. 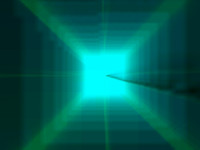 Second, check out my new screensaver. Imagine it, like, moving and stuff: glowy vapor trails and shifting transparent fields bleeding off an object bouncing around in 3D. What it does it, draw a cube and a few line segments; then render the whole scene into a texture; then repeatedly render increasingly-enlarged and increasingly-transparent versions of that texture back onto the scene itself. That produces the blur. If you don't have a good video card, it'll really hurt the machine bad: on one of my machines that is doing GL in software, it make the mouse stop moving for like 5 seconds at a time, though I get about 10FPS on a Matrox G450 at 1280x1024. (It'll be in the next xscreensaver, but turned off by default, which will be out probably some time in the next few weeks.)

I learned how to do this trick in one of the tutorials on nehe.gamedev.net: there are a bunch of cool OpenGL tutorials there.

the baddest welding masks in the world

Suppose you're devising a logo for a new wing of the Defense Advanced Research Projects Agency, an office charged with developing intelligence tools and integrating the government's existing surveillance networks. Suppose that it has a vaguely sinister name -- say, the Information Awareness Office -- and that it's to be run by a former Iran-contra conspirator. What would your design be?

If you work for the actual Information Awareness Office, created earlier this year with one-time National Security Adviser John Poindexter at its helm, you'd depict a Masonic eye-in-the-pyramid blasting a sci-fi death ray across the globe. If you wanted to play on the fears of every paranoiac in the country, you couldn't do much better than the IAO's logo, on display at the Office's site. (That's where we got this low-resolution graphic, after DARPA stonewalled our attempts to secure a high-resolution version. Hmmm...)

Another agency may be trying to outdo the IAO. The Patent and Trademark Office's symbol for homeland security is an eyeball floating behind a keyhole, with an upside-down flag in the background. If a dissident Web site put up a picture like that, it would be accused of fomenting panic.

Semiotically speaking, this is the most inept administration in years. Either that, or its art department is trying to tell us something.

BETHLEHEM, Pennsylvania (AP) -- Hardy stomached men from around the country will scarf sheep's entrails for a chance to be named "haggis king."

The haggis eating contest Friday is part of Bethlehem's Celtic Classic Festival. The winner will be the first to finish a pound and a half of the Scottish dish, a mix of sheep's organs, oats and spices.

Tensions are high this year as two former champions prepare to go head to head. Steve Cunningham, of Bethlehem, and Peter Stefchak, of Anchorage, Alaska, have both won twice.

Stefchak said his training regimen includes starving himself for 24 hours before the contest. [...]

Guwahati, Oct 3, IRNA -- 'Gods' in India's northeastern state of Assam have become terrors with a special liking for the fairer sex -- putting human males into a quandary.

Rampaging troops of monkeys, worshipped by Hindus as a one of the gods, have developed a fancy for women and girls -- barging into homes in daylight and snatching away clothes and playing pranks.

"Up to 20 monkeys roam around in my locality, entering homes during the daytime when most of the male folks are out on work," Rashmi Borthakur, a housewife in Guwahati, Assam's capital, said.

From eating cooked food in the kitchen to plundering belongings inside rooms, the monkeys have been wreaking havoc in most of Assam's towns and cities.

The monkey menace has put the state wildlife authorities in a fix. "We know the immensity of the problem but are totally helpless," Assam's Chief Wildlife Warden Sonadhar Doley told IRNA.

The lurking fear of monkeys on the prowl has led to panic in certain localities in the capital city with people now ensuring all doors and windows were bolted to prevent the marauding primates from entering.

According to estimates there could be up to 10,000 rhesus monkeys in Guwahati alone with the beasties fast multiplying by the day.

The rhesus monkeys have since ages been cohabiting among humans in India with the animal considered sacred by the majority Hindus.

Experts were now trying for a workable monkey policy to check the menace but blames humans for forcing the simians to come out of their habitat.

Trappers and buyers required young, or sub-adults, breaking up large colonies into smaller groups that extended their living space into cities. In 1972, a Wildlife Protection Act made monkey exports illegal, though some smuggling continues.

Astronomers announced today the discovery of the largest object in the solar system since Pluto was named the ninth planet in 1930. The object is half the size of Pluto, composed primarily of rock and ice, and circles the sun once every 288 years.

Named Quaoar (pronounced KWAH-o-ar), the object resides in the Kuiper belt, a region of the sky beyond the orbit of Pluto and about 4 billion miles (6.5 billion kilometers) from Earth. The Kuiper belt is chock full of remnants from the planet-formation era of the solar system. [...]

Varuna, a Kuiper belt object discovered in 2000, is 1,000 kilometers in diameter and Ixion, which was discovered in 2001, is thought to be of similar size to Quaoar and Varuna, but its diameter has yet to be accurately measured.

The discovery of Quaoar also adds support to the argument Pluto itself is a Kuiper belt object rather than a planet, according to the researchers. [...]

"A reasonable estimate is that there are about 900 planets. All but eight of them are out there [in the Kuiper belt]," he said.

"Your responsibilities will vary, but might include tasks such as: skipping down a street with hedge clippers in hand, fighting off gorillas, defending yourself against packs of hungry hounds, committing arson, picking the pockets of venture capitalists, and sitting in the corner looking cute.

Qualifications: To be successful, you will need extensive knowledge of manipulative behavior. A background in high-power explosives is a plus. 9 years experience as a delightful daughter is required for this position."

The two connection plates on either side of the module are identical, hermaphroditic and have a 4 way rotational symmetry. That is, any two connection plates may be attached together at 90 degree increments. To connect the plates four grooved pins enter four holes on the opposing plate and are grabbed by a latching mechanism that can be later released by a shape memory alloy actuator. Each face has 4 times redundant custom made hermaphroditic electric connectors to enable power and communications to be passed from module to module. Each face also has four IR LEDS and sensors for face to face docking during reconfiguration and rudimentary module-to-module communication. This communication is used during initialization by the robot to discover its configuration.