20 years ago
I wrote a new screensaver yesterday: 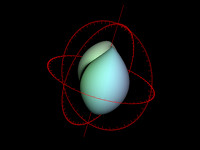 It's this eight term sinusoidal/exponential polar-coodinate function that shows some funky shapes that come out of the harmonics. Then I slapped some circular guides and zipping lines around it to make it, you know, all high tech and stuff. It works pretty well, except with some shapes, it's rendering back faces instead of front faces, because sometimes the function spits out faces that are inside out, and I can't figure out where I have to flip a sign to fix it... It works ok if I render both front and back faces (but that's half as fast) but even then, the twisted faces are too dark, because the normal is pointing the wrong way. This would be a lot easier if I didn't suck at math.

In crisis-narrowly-averted news, I was without DirecTV for most of the day today. After the tech support guy read me the FAQ from their website, and recommended against crawling around on the roof, I went up there to see if someone had sat on my dish or something. It looked fine, but I jiggled it, and now it works again. Percussive maintenance to the rescue again: when in doubt, whack it.

The Spider-Man movie was awesome, I totally loved it. I even approved of the changes they made, like the organic web shooters, and making everyone younger. I had an ancient memory come shooting back while watching it: when Peter was standing over Uncle Ben, I suddenly remembered the first comic book I'd ever owned! I must have been 4 or 5. My mom had been in a fire, and was in the hospital with a tube down her throat, and we were doing a lot of waiting around. My uncle took me to news-stand in the lobby and bought me a Spider-Man comic! I think Mysterio was the villian, but I don't really remember. But anyway, that scene in the movie was extra creepy as a result: Peter's standing there over his uncle's body, and I'm suddenly vividly remembering being a little kid and reading about Spider-Man for the first time on the same day that it dawns on me that people aren't indestructible.

I can't find the comic. How can this be? I never throw anything away! This is horrible.